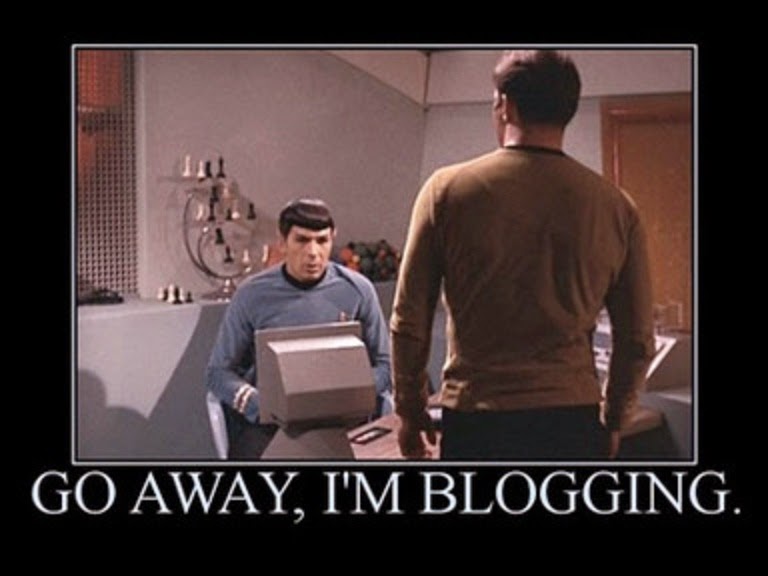 Diplomat is the only public company (and the only specialty pharmacy) to report its per-prescription gross profits and gross margins. As you will see below, both of these financial metrics grew in 2014. Diplomat’s impressive results are a powerful counterpoint to the argument that specialty pharmacy margins are being squeezed.

THE SEARCH FOR SPECIALTY PHARMACY PROFIT

Quick reminder: gross profit equals a pharmacy’s prescription revenues minus the costs of products (net of discounts and returns) bought from a manufacturer or a wholesaler. Gross margin expresses gross profit as a percentage of revenues.

Diplomat’s 2014 financial results exceeded expectations, including my own forecasts for its performance. Revenues were $2.2 billion, up 46% compared those in with 2013.

The chart below shows Diplomat’s average per-prescription gross profit and gross margin from 2010 through 2014. Its 2014 gross margin was about 6.0%, which isn't surprising since it dispenses primarily brand-name medications. (If you are in fact surprised, please see Chapter 7 of the 2014–15 Economic Report on Retail, Mail, and Specialty Pharmacies.) 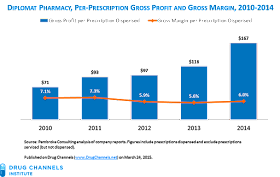 In addition to basic product dispensing, specialty pharmacies provide other complex services beyond those typically needed for a traditional drug. The higher gross profits were absorbed by these additional services. That’s why the company’s Earnings Before Interest, Taxes, Depreciation, and Amortization (EBITDA) was only 1.7% in 2014, which is comparable to a retail pharmacy’s bottom line profit.

These profit figures include only prescriptions dispensed by Diplomat, and exclude prescriptions serviced (but not dispensed) under its Retail Specialty Network (RSN) program. As of mid-2014, Diplomat provided the specialty pharmacy service for 8 retailers and independent pharmacy groups, representing about 4,500 stores. Retailers include the pharmacies of Fred’s, Kmart, Safeway, and Target. Diplomat also provides this outsourced service to hospitals and health systems. In 2014, Diplomat serviced 212,000 such prescriptions and earned an average fee of $27 per prescription.

Two weeks ago, Diplomat announced its acquisition of BioRx, a specialty pharmacy and infusion services company with $227 million in revenues. This is Diplomat’s third infusion deal, following its 2014 purchase of MedPro Rx and its 2013 acquisition of American Homecare Federation. 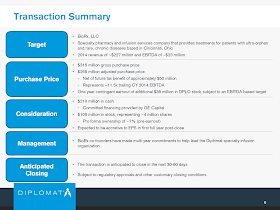 Diplomat expects to close the BioRx deal by March 31, so its 2015 financial guidance included only three quarters of BioRx’s financial results.

This guidance, however, implies that BioRx will have an adjusted EBITDA margin of 10% to 12%. That’s much more profitable than Diplomat’s core specialty pharmacy business.

I estimate that for the last three quarters of 2015, BioRx will account for only 7% to 9% of Diplomat’s revenues—but 38% to 40% of its total adjusted EBITDA. After adding in the previous two acquisitions, it looks like specialty infusion will constitute nearly half of Diplomat’s profits.