With this transformative deal, Rite Aid is now explicitly building a mini-CVS Health. That’s not necessarily a bad thing.

Below, I highlight a few interesting tidbits about EnvisionRx, offer some initial thoughts on the transaction, and provide some preliminary prognostications. Based on what I've heard so far, this deal looks to be a big win for Rite Aid.

Question to ponder: Will this deal trigger a new partnership between Express Scripts and Walgreens Boots Alliance?

Here are some highlights from yesterday’s conference call announcing the deal. First, let's look at the numbers. 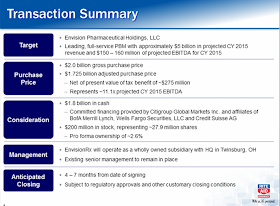 EnvisionRx has had truly impressive growth, especially in the past year. As expected, the Express Scripts/Medco transaction didn't end competition in the market for PBM services. (See 2012’s ESRX-MHS: Analysis of the FTC Decision.) 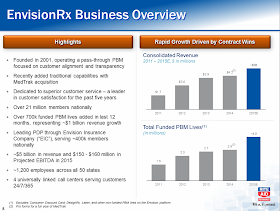 Here’s a look at some of EnvisionRx’s key commercial PBM clients. 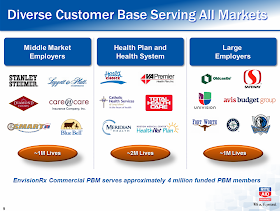 EnvisionRx also operates Medicare Part D plans with preferred cost-sharing networks, although its strongest position is in the low income subsidy market. See In 2015, 8 of 10 Seniors Choose Preferred Pharmacy Networks in Medicare (Plus: Which Plans Won). 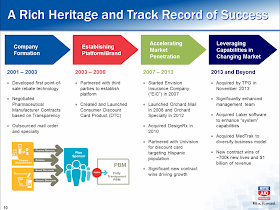 We’ll learn more about the deal and its implications in the coming months. In the meantime, here are my snap judgments and best guesses.

Expect Rite Aid to expand its geographical reach. Narrow network models require retail networks that overlap with a plan sponsor’s beneficiaries. Rite Aid, however, does not have a national retail network. There are a significant number of EnvisionRx clients that are not in Rite Aid’s markets. Rite Aid CEO John Standley is currently president of NACDS—a perfect platform to identify tuck-in acquisitions. Rite Aid has also been actively trying to buy independent pharmacies

Rite Aid now has a legitimate specialty growth platform. Compared to Rite Aid, EnvisionRx has better access to specialty drugs with limited dispensing networks (as discussed in section 3.7.1. of our new report).

The deal is a small win for McKesson. EnvisionRx’s relatively small mail and specialty pharmacies currently buy drugs from AmerisourceBergen. Once the deal closes, EnvisionRx will purchase drugs via Rite Aid’s partnership with McKesson.

Rite Aid’s RediClinic deal makes even more sense. Rite Aid changed its clinic strategy with the 2014 acquisition of RediClinic. At the time of the acquisition, RediClinic operated 30 clinics in the greater Houston, Austin and San Antonio metropolitan areas. Rite Aid has now started opening up clinics in its Baltimore/Washington D.C and Philadelphia stores. It’s another example of how Rite Aid is emulating CVS Health’s MinuteClinic, which remains the largest and fastest-growing retail clinic operator.

THE TRIUMPH OF HOPE OVER EXPERIENCE

In 1998, Rite Aid paid $1.5 billion to buy PBM PCS Health Systems from Eli Lilly. The PBM was combined with Rite Aid’s in-house Eagle PBM. In 2000, Rite Aid sold the business for $1 billion to AdvanceParadigm. The new company was renamed AdvancePCS and sold to Caremark in 2003, which was then acquired by CVS in 2007.

In 2005, Rite Aid partnered with ProCareRe to provide PBM services to employers, health plans and insurance companies. As far as I know, that effort didn’t get much traction.

Given EnvisionRx’s track record and management team, I predict that Rite Aid will break the curse. When there's more meaningful news, I'll ring a fricken bell or something.