Today, I delve into drug spending trends by payer. As I describe below, policy and population changes led to significant drug spending growth by Medicare and Medicaid, while private health insurance and consumers paid less.

The 2013 numbers provide a peek at the forces that will change drug payment in the coming years. Don't say you weren't warned!

The chart below shows the payment sources for outpatient prescription drugs (share of dollars) in 2013, the most recent year for which data are available. Medicare and Medicaid—the two primary CMS programs—paid for 35% of total outpatient drug spending in 2013. The private health-insurance share peaked in 2001 at 51% and has been declining ever since—reaching 43.5% in 2013. (I describe the data sources in my previous post.) 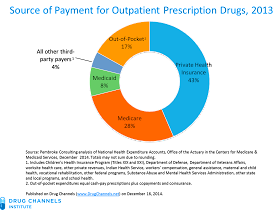 The next chart shows the year-over-year growth rates in expenditures, by payer. Note that these expenditure data are net of manufacturer rebates, so the reported growth rates differ from changes in pharmacies’ prescription revenues or manufacturers’ gross revenues. 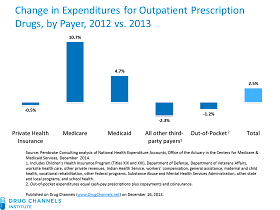 The ACA also increases subsidies for Part D enrollees who reach the catastrophic benefit phase (a.k.a., “donut hole”), which contributed to Medicare’s growth rate. Starting in 2011, the ACA requires manufacturers of drugs covered by Medicare Part D to participate in the Medicare coverage gap discount program. It provides 50% discounts on brand-name drugs to enrollees who reach the coverage gap. During 2013, the 4.3 million seniors and people with disabilities saved $3.9 billion, or an average of $911 per beneficiary.

In 2013, Federal expenditures grew by 5.7%, as utilization increased and the rebates became part of baseline spending. In contrast, state and local expenditures on Medicaid slowed in 2013. In 2011 and 2012, they had grown by 24.4% and 14.6%, respectively. The divergence stems from changes in the Federal Medical Assistance Percentage (FMAP) formula, which allocates Medicaid spending between the states and the federal government.

Note that CMS does not distinguish between employer-sponsored private insurance and individually purchased plans, including coverage purchased through the state-level Health Insurance Marketplaces (HIM). The HIM plans will be a significant factor in the 2014 data, but they had little impact in 2013.

4. Consumers paid less. In 2013, consumers’ out-of-pocket expenses—cash-pay prescriptions plus copayments and coinsurance—dropped by $558 million, from $46.5 billion in 2012 to $45.9 billion in 2013. The consumer’s share is predicted to keep dropping, as I explain in Here’s Who Will Pay For Prescription Drugs in 2023.

In its Health Affairs article, the CMS economists gamely reiterates their belief that the slowdown in overall healthcare spending was due to economic conditions, not the Affordable Care Act. They note:


The recent similarity between national health care spending and GDP growth is consistent with historically observed patterns as the economy moves further from the end of the recession. The key question is whether health spending growth will accelerate once economic conditions improve significantly; historical evidence suggests that it will.

Health economic nerds, such as yours truly, are very familiar with this relationship. Check out my favorite chart from last year in A Very Cool Look at Healthcare Spending and the Economy.

However, the wonks wisely hedge their bets. Here is their article’s conclusion:


More notable provisions of the ACA, such as those related to the health insurance Marketplaces and the Medicaid expansion, will affect the future health care spending trend through the expansion of health insurance to people who were previously uninsured and the availability of plans with more comprehensive benefits for those who previously had coverage.

At the same time, there have been and will continue to be forces that keep medical price growth low, particularly for Medicare. In addition, shifts to private coverage with higher deductibles could continue to have an effect. The balance of these and many other factors over the next few years will determine how the historically low health spending growth from 2009 to 2013 is viewed: as the temporary aftermath of the great recession or the beginning of a new era.

While politics typically prevents an honest discussion of these tradeoffs, reality will render its own judgment over the next few years.