This Thursday, the Senate Subcommittee on Primary Health and Aging, currently led by U.S. Senator Bernie Sanders (I-VT), will hold a hearing titled “Why Are Some Generic Drugs Skyrocketing In Price?”

The hearing is not a surprise. As I discuss in Congress Grills Generic Drug Makers Over Price Inflation, Senator Sanders and U.S. Representative Elijah E. Cummings (D-MD) have been probing generic manufacturers.

Our latest exclusive analysis (below) finds that generic inflation is alive and well. During the third quarter of 2014, more than one-third of generic drugs became more expensive. A small number of drugs have experienced mega-increases (exceeding 1,000 percent) over the past three months.

I’m skeptical, however, that the Congressional hearing will tell us anything we don’t already know—or anything that Congressmen Sanders and Cummings haven't already concluded.

I compared:
This approach updates my previous annual analysis—and allows us to see whether generic inflation has accelerated over the last quarter. Note that I define a "drug" as an ingredient/strength combination, so that each manufacturer’s version of the same drug has the same price in the analysis. (This is a limitation of the NADAC data.) If each manufacturer's version of an ingredient/strength combination was considered to be a separate drug, then the sample size would have been five to six times larger.

The chart below shows the frequency distribution of year-over-year acquisition cost changes among the 2,370 generic drugs. It updates the chart shown in Retail Generic Drug Inflation Reaches New Heights. 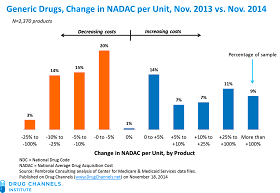 The results are similar to my previous analysis.
QUARTERLY CHANGE 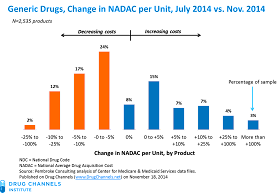 In the third quarter, 55% of generic drugs decreased in cost, while 37% increased. Among the generic drugs in this quarterly sample, 77 (3.0% of the total) more than doubled in costs.

Some products had mega-increases in recent months. In some cases, the cost increases were substantial. The table below shows the 10 drugs with the greatest percentage increases. In the table, I exclude two sole-source branded products—Epitol (carbamazepine) and Cormax (clobetasol)—that experienced increases comparable to their generic equivalents. 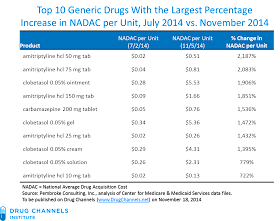 As I note in Winners and Losers from Generic Drug Inflation, consumers are the biggest losers from generic inflation. Last week, the CBS Evening News highlighted this inflation’s impact on consumers. (Bonus: They featured Pembroke’s data analysis!) Click here if you can’t see the video below.

Why do prices for some generic drugs continue to rise? In theory, ongoing inflation for a particular product should encourage new suppliers, thereby lowering prices.


The FDA has a policy to expedite reviews to combat shortage, but there is a backlog of applications for generic approvals. As of early last month, agency data shows there were 3,552 applications waiting to be processed, compared with 1,359 in October 2012, when legislation passed to create fees for speeding reviews.

Based on my brief background conversation with staffers from Senator Sanders and Congressman Cummings offices, I don’t expect this uncomfortable reality to be discussed in Thursday's Congressional hearing. The congressmen’s young staffers were more interested in arguing with me about their preconceived conclusions than in hearing any alternative explanations.

When the new Congress starts in January, Senator Sanders will lose his chairmanship of the Subcommittee on Primary Health and Aging. Until then, it looks like this lame duck Congress will quack at least one more time.
Adam J. Fein, Ph.D. on Tuesday, November 18, 2014