New Findings on Oral Oncologic Spending and Hospitals’ 340B Abuse

October’s Health Affairs focuses on “Specialty Pharmaceutical Spending & Policy,” and it offers many must-read articles for anyone working with specialty drugs. Check out the table of contents. (Sorry, full articles are available only to subscribers.)

Below, I highlight key findings from our paper. I also discuss a notable and controversial paper on hospitals’ 340B abuses. 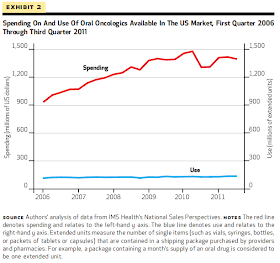 The good news? Spending levels and trends were driven by the use of new brand-name oral oncologics. Many of these drugs represent key therapeutic advances over the standard of care for the treatment of specific cancers. Spending was concentrated among newer targeted agents, including second-generation tyrosine kinase inhibitors used to treat chronic myelogenous leukemia.

My $0.02: More spending led to better clinical outcomes for patients. While we didn’t look at overall health expenditures in our paper, I suspect that the increased drug spending more than offset spending on other health care services.

Dr. Conti was very busy. She was also the lead author on The 340B Drug Discount Program: Hospitals Generate Profits By Expanding To Reach More Affluent Communities, with Peter Bach.

This paper is one of the first peer-reviewed examinations of the 340B program’s many problems. From the abstract:


“We found that hospital-affiliated clinics that registered for the 340B program in 2004 or later served communities that were wealthier and had higher rates of health insurance compared to communities served by hospitals and clinics that registered for the program before 2004. Our findings support the criticism that the 340B program is being converted from one that serves vulnerable patient populations to one that enriches hospitals and their affiliated clinics.”

Unfortunately, the results will not surprise anyone who has been paying attention, per Unsweet Charity: 340B Abuses When Hospitals Buy Oncology Practices.

The American Hospital Association (AHA) quickly denounced the study in Health Affairs Study Gets It Wrong on 340B. As usual, the AHA offers a mish-mash of talking points, none of which address the legitimate questions surrounding the program’s operations. AHA also repeats the so-called “fact” that 340B accounts for “only 2% of U.S. drug purchases.” As I demonstrate in 340B Is Taking Over the Hospital Market—With a 25% Share, this stat is incredibly misleading and fundamentally inaccurate.

On the Health Affairs blog, Safety Net Hospitals for Pharmaceutical Access (SNHPA) submitted a more specific critique of the study’s methods. (See Drug Discount Analysis Misses The Mark.) However, SNHPA couldn't resist its usual cheerleading, which claims that everything’s great and nothing should be changed, ever.

THE REST OF THE NEWS

Other noteworthy articles look at specialty copay coupons, the “value for money” of specialty drugs, and payer management tools.

All in all, October’s Health Affairs is truly something worth cheering for—and not just because I co-authored one of the articles.
Adam J. Fein, Ph.D. on Thursday, October 09, 2014