Last Sunday, 60 Minutes aired a controversial anti-pharma story called The Cost of Cancer Drugs. The segment prominently featured several Memorial Sloan-Kettering and MD Anderson physicians, all of whom spoke with no self-awareness about health care costs. (Hints: Drugs are not the problem.) For your consideration, here is a rerun of a still-relevant Drug Channels article from October 2012, complete with my original 340B predictions from that period. P.S. Special pricing for our new 2014–15 Economic Report on Pharmaceutical Wholesalers and Specialty Distributors ends today! 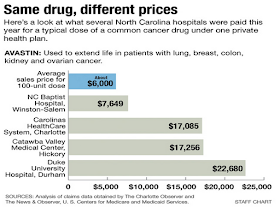 Yes, this is a true, but little-known fact: 340B hospitals are permitted to use drugs purchased at the 340B price for all individuals who meet the definition of a patient, whether or not those patients are low income, uninsured, or underinsured. I describe how this can be done in my economic report on retail, mail, and specialty pharmacies.

The channel blurring and controversy will only grow.
Adam J. Fein, Ph.D. on Friday, October 10, 2014