As I note in yesterday’s post Retail Generic Drug Inflation Reaches New Heights, half of all retail generic drugs became more expensive over the past 12 months.

Let me know what you think by commenting below. 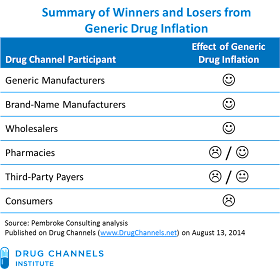 Generic Manufacturers—The generic drug makers that sell higher-priced drugs are benefiting from higher prices. The manufacturers that choose (or are forced to) to stop producing are the losers. I don’t understand why more generic manufacturers aren't entering the shortage markets. Many of the products are relatively simple to produce, and the profits should be substantial.

Brand-Name Manufacturers—Generic drug shortages are creating an unexpected sales boost for the brand-name drugs that have lost marketing exclusivity. In some instances, a brand-name drug with a manufacturer rebate could be even less expensive than a generic drug that has experienced hyperinflation.

Wholesalers—Wholesalers are benefiting from these price increases, which can typically be passed directly to their pharmacy customers. When the wholesaler’s mark-up remains constant, gross profit dollars are increasing along with drug costs. Generic inflation is also lifting wholesaler revenue growth, which had been expected to decline due to generic deflation. During investor calls, wholesalers have cited this beneficial effect on revenues and profits.

The biggest pharmacy losers are any chains that foolishly signed at-risk payer contracts, such as one with a fixed generic prescription payment to the pharmacy. Such contracts are an unhedged risk on generic deflation and superior sourcing. For these chains, generic inflation will pummel profits until (if?) contracts can be renegotiated.

Over time, payers may welcome higher generic prices, because manufacturers will be less likely to exit more-profitable generic markets. Higher prices will encourage more companies to produce generic drugs in short supply, which will reverse the recent growth of older brand-name drugs.

Consumers—Consumers are the biggest losers. They will see higher out-of-pocket costs, especially as more costly generics move to a higher copayment tier. Ongoing inflation may even cause widespread use of multiple generic tiers.

As prices have increased, many chains have dropped drugs from their discount generic drug programs. Walmart, for instance, no longer includes doxycycline hyclate and tetracycline on its $4 prescription drug list. These programs offer significant value for uninsured and underinsured consumers, who can purchase certain generic drugs below the retail list price. Some insured consumers may even bypass their insurance in favor of a cash-pay program, especially if the copayment exceeds the cash price. Fewer low-cost generics mean fewer discount programs.

When will generic inflation slow down? No one knows, but it’s certainly reshaping the industry and our expectations.