Surprise! Retail generic drugs are no longer getting cheaper over time.

Our latest exclusive analysis (below) finds that half of all retail generic drugs became more expensive over the past 12 months. And some of those drugs got much, much more expensive. One out of 11 generic drugs more than doubled in cost, with some increases exceeding 1,000 percent.

Product shortages appear to be the primary culprit. How did our retail drug supply chain become so fragile?

Drop by tomorrow, when I’ll review the winners and losers from this crazy phenomenon.

Each data file contains more than 22,000 11-digit National Drug Codes (NDCs) for brand and generic outpatient drugs. I compared the July data release (dated 7/2/14) with the previous year’s file (dated 7/4/13). After I filtered out brand-name and over-the-counter NDCs, 14,479 generic drug NDCs appeared in both data sets.

There are multiple NDCs for most generic products. However, the NADAC data report the same price for all NDCs of the same product. After I eliminated the duplicates, 2,376 unique generic products remained. I then computed the simple percentage change in the NADAC per unit for each product.

Note that the NADAC data do not reflect a pharmacy’s net actual acquisition costs, because the survey collects only invoice costs, and excludes off-invoice discounts, rebates, and price concessions. The omitted figures include volume-based rebates from wholesalers, buying groups, and manufacturers.

For more info on NADAC, see “Acquisition Cost Reimbursement,” on page 83 of our 2013–14 Economic Report on Retail, Mail, and Specialty Pharmacies.

Retail generic drugs usually get cheaper over time. By contrast, our analysis showed that the median price change was 0%. In other words, 50% of the drugs increased in cost, and 50% declined.

The chart below shows the frequency distribution of acquisition cost changes among the 2,376 generic drugs. 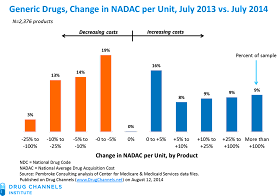 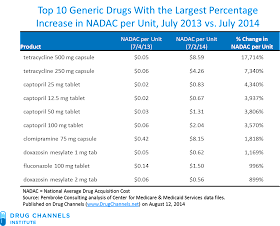 These increases appear to stem from a nationwide supply shortage. Here's what the ASHP Drug Shortage website reports:
Oddly, the FDA Drug Shortage database classifies the tetracycline shortage as having been “resolved” in March 2014. Huh?

A few years ago, we all worried about generic injectable drug shortages. Most products had two or fewer suppliers. (See Drug Shortages and Our Fragile Supply Chain.) It’s hard to believe, but the retail generic supply chain is headed in the same direction.

Tomorrow, I’ll examine the winners and losers in this unfortunate situation.