Medicare Up, Everyone Else Down: The Latest U.S. Drug Spending Data

Read on for our detailed review and analysis.

Expenditure (spending) data differ from that of pharmacy revenues, manufacturer sales, or provider purchases. NHE totals are net of manufacturer rebates, so the reported figures are lower than pharmacies’ prescription revenues.

Note that these figures do not measure total U.S. spending on prescription drugs. Sales through outpatient retail, mail, and specialty pharmacies account for about 75% of total pharmaceutical manufacturer sales. Unfortunately, there is no way to figure out spending for inpatient drugs in other NHE categories because spending is bundled with inpatient procedure fees. For a concise yet wonky explanation, see National Health Expenditures Accounts: Methodology Paper, 2012 (page 13).

WHO PAID FOR PRESCRIPTION DRUGS IN 2012

The chart below shows the payment source for outpatient prescription drugs (share of dollars) in 2012, the most recent year for which data are available. The two primary Center for Medicare and Medicaid Services (CMS) programs—Medicare and Medicaid—paid for 33% of total retail drug spending in 2012. The private health-insurance share, which was 44% in 2012, peaked in 2001 at 51% and has been declining ever since. 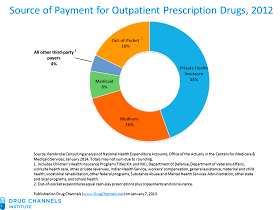 The second chart shows the year-over-year growth rates in expenditures, by payer. In 2012, Medicare was again the fastest-growing payer, by a wide margin. 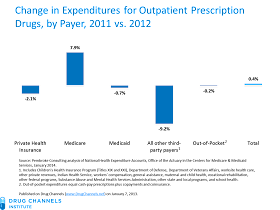 For a look at the projected future payer mix, see Public Funds and Exchanges Will Soon Overtake Employer-Sponsored Insurance.

THE NEWS BEHIND THE 2012 NUMBERS

The generic wave hit national spending. Spending on outpatient prescription drugs grew much more slowly than overall national health expenditures. In 2012, prescription drug spending grew by only 0.4%, or 330 basis points less than the 3.7% growth in overall expenditures. The gap was comparable to 2010, when prescription drug spending was also 330 basis points less than national health spending. The substitution of less-expensive generic drugs for brand-name drugs was a big factor behind the slow growth in spending. In 2012, three top-selling drugs—Lipitor (atorvastatin calcium), Plavix (clopidogrel), and Singulair (montelukast sodium)—faced multi-source generic competition. Combined gross sales of these three drugs were $19.1 billion in 2011.

Commercial payers spent less. The 2.1% decline in private health insurance expenditures is comparable to the commercial drug trend figure that Express Scripts reported in March. See Insights from the 2012 Express Scripts Drug Trend Report. Aggressive benefit design and the generic wave played a big part in this decline. As I note in How the Fourth Tier Coinsurance Boom Drives Copay Offset Programs, 25% of employees now have a plan with four or more tiers.

Consumers paid about the same share. In 2012, consumers’ out-of-pocket expenses—cash-pay prescriptions plus copayments and coinsurance—was an historically low 17.8% of total U.S. retail drug expenditures. This figure is comparable to 2011’s 17.9%. Since overall expenditures did not change significantly, total consumers’ expenses were also similar—$46.9 billion in 2011 and $46.8 in 2012.

Obamacare didn’t cause the spending slowdown.

As the CMS economists note, growth has remained low since 2009, increasing between 3.6% and 3.9% annually. In the Health Affairs article, the authors unequivocally state:


“The Affordable Care Act (ACA), which was enacted in March 2010, had a minimal impact on overall national health spending growth through 2012.”

Let’s hope the White House doesn’t engage in fanciful Affordable Care Act triumphalism, especially since health care spending is most tightly linked to overall economic growth. Check out my favorite chart of 2013 in A Very Cool Look at Healthcare Spending and the Economy.

Oops, too late. Referring to rising healthcare costs, the White House just proclaimed: "The Affordable Care Act, for the first time in decades, has helped to stop that trend."

Sigh. What is an honest wonk to do?