The highlights:
Are pharmacists undervalued? Not if money equals appreciation. Read on for the details.

The OES survey is a collaboration between BLS and the State Workforce Agencies (SWAs). BLS funds the survey and dictates its structure, while the SWAs collect most of the data. The OES survey categorizes workers into detailed occupations based upon the Standard Occupational Classification (SOC) system. You can read more about the methodology in the Technical Notes for May 2012 OES Estimates.

The “pharmacist” occupation code is 29-1051. Using these data, I identified pharmacists working at retail, mail, and specialty pharmacies by analyzing the following NAICS (North American Industry Classification System) industries:
You may recall that that I analyzed Census data on NAICS 446110 in Drugstore Sales Drop Along with Drug Trend: Implications for Retail Pharmacy.

Note that BLS computes the annual wage data by multiplying an hourly mean wage by the "year-round, full-time" figure of 2,080 hours. The data below show these full-time gross salary data.

SHOW ME THEIR MONEY

The table below summarizes my analysis of salaries and employment, by dispensing format. 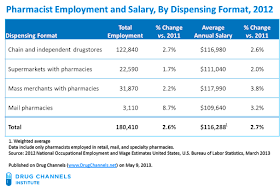