Feeling left out, Prime Therapeutics sent me its heretofore unpublished 2013-2015 forecasts. So, today’s article is a Drug Channels exclusive. Highlights:
Below, I also give Prime an opportunity to explain why it stopped publishing a conventional drug trend report in favor of its 10-foot long comic strip.

Check back in three years and we’ll see which PBM turned out to be right. In the meantime, Prime has started a Drug Trend blog.

The table below summarizes the latest forecasts for overall, traditional (non-specialty), and specialty drug trends. The table now includes CVS Caremark, Express Scripts, and Prime Therapeutics. Click the table to enlarge it. 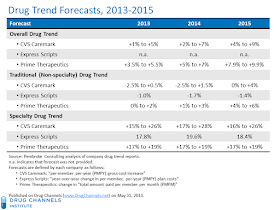 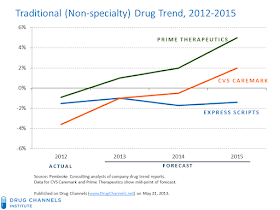 
“Prime’s book-of-business generic rate is already bumping up against what we consider to be the peak generic rate of about 85 percent. While there may be opportunity for employer groups who have not fully maximized their generic use, we believe the overall lack of new generics on the horizon, combined with increased drug utilization, reduces the likelihood of a negative traditional drug trend.”

Prime’s outlook for annual specialty drug trend is consistent with the other PBMs. 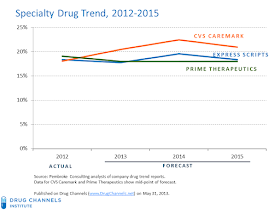 At the recent Academy of Managed Care Pharmacy meeting, Prime released Specialty Drugs are Forecasted to be 50 Percent of All Drug Expenditures in 2018. I encourage you to read this poster, which explains the method, data, and results. Here is a summary chart of Prime's specialty spending forecast: 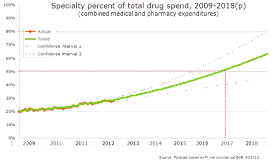 Note that the forecast for drug expenditures include both pharmacy benefit payments and medical benefit allowed amounts. The poster also has some neat data about the specific therapies behind specialty spending.

SO, WHAT HAPPENED TO THE DRUG TREND REPORT?

I (gently) mocked Prime’s decision to forgo a formal drug trend report in favor of this comic strip, er, I mean “infographic.” As Prime explains:


“Few people outside the industry’s inner circle have sufficient understanding of pharmacy benefit management – particularly the complex underlying factors that influence the landscape – to gain much insight from a traditional drug trend report. That’s why we sought to present a brief overview of key information that is top of mind during “drug trend season” an easily-digestible, memorable way…”

Fair enough. However, true Drug Channels wonks (ahem) would have preferred to have the detailed report to complement cartoons of the Eiffel Tower and a Ferrari. Just my $0.02. YMMV.