Last week, Express Scripts released its projection for drug trend—the annual change in prescription drug expenditures of its clients. Surprisingly, the new projections differ significantly from CVS Caremark’s forecasts. Highlights:
Read on for the details. Regardless of which forecast you believe, specialty drugs will be at least 50% of pharmacy benefit spending within 6 years. Get ready.

Here are the data sources:
There are subtle methodological discrepancies between each PBM’s drug trend figures, per Is Caremark really better than Express Scripts at managing drug trend? However, I still believe that we can compare the projections.

Drug trend reflects the interaction of cost per drug and total utilization of drugs by the beneficiaries of a PBM-managed plan. Thus, these figures are not directly comparable with the Center for Medicaid and Medicare Services (CMS) total drug expenditure forecasts, which I discus in Who Will Pay for Prescription Drugs in 2021?

Bizarrely, Prime Therapeutics has decided to convert their formerly-useful drug trend report into this goofy cartoon. Sorry, but I can’t puzzle out Prime’s projections. Bigger than the Empire State Building, or something?

The table below summarizes the latest forecasts for overall, traditional (non-specialty), and specialty drug trends. Click the table to enlarge it. 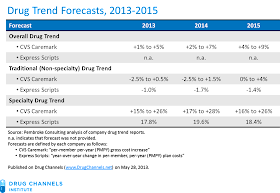 Both PBMs agree that drug trend for traditional drugs will be very low or negative due to the introduction of new generic drugs. The dynamics of utilization and price will have a big impact on retail pharmacy, per Drugstore Sales Drop Along with Drug Trend: Implications for Retail Pharmacy. 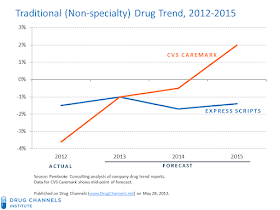 Utilization appears to be a key difference between the forecasts. Express Scripts expects utilization “to remain relatively stable,” while CVS Caremark expects non-specialty utilization growth to go from -0.5% in 2012 to 0-2% in 2015.

Both PBMs forecast drug trend for specialty drugs will remain elevated, in the 15% to 25% range over the next few years. The factors behind this projected increase are price inflation, greater utilization of existing therapies, and the launch of newly approved products. 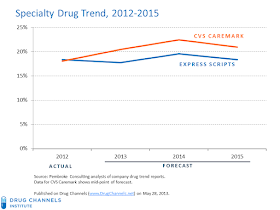 Key prediction from Express Scripts: “Less than 1% of prescriptions filled in 2012 were for specialty medications, yet they accounted for 25% of total prescription drug expenditures. By 2019 or 2020, specialty drugs are expected to represent 50% of plan sponsors’ overall drug spend.”

Given the projected growth rates shown above, revenues in the pharmaceutical industry will shift from traditional brand-name drugs to specialty drugs. Don't be surprised when it happens.
Adam J. Fein, Ph.D. on Tuesday, May 28, 2013