The Coming Battle Over 340B Contract Pharmacies

Check out an important new must-read white paper for anyone in the drug channel: The 340B Drug Discount Program: A Review and Analysis Of The 340b Program. The report was funded by an unusual coalition of industry associations representing manufacturers, pharmacy benefit managers (PBMs), independent pharmacies, and oncology practices. (See the list below.) It provides a useful 340B background and explains how hospitals are profiting in ways that seem to go far beyond the program’s original intent.

Contract pharmacies are one crucial, but little understood, part of the program. Using contract pharmacies, a hospital can (legally) profit from a commercially-insured prescription filled by a community retail pharmacy and paid by a private third-party payer. Pembroke Consulting’s research shows that Walgreens is the biggest 340B player. What’s more, manufacturers could potentially pay both 340B and PBM rebates for the same commercial prescription.

To 340B or not to 340B? Given the money involved, it’s not a tough question for hospitals anymore. But something is rotten in the state of Denmark. Read on and let me know if you agree.

TO TAKE ARMS AGAINST A SEA OF TROUBLES

Also note: “The views expressed herein are those of the sponsoring organizations.” Quite interesting, given the inherently different perspectives.

Note that the National Association of Chain Drug Stores (NACDS) was NOT a co-sponsor. The table below shows why.

Consistent with the new 340B report, I identify “Growth in the 340B Discount Program” as a major economic trend for pharmacies, manufacturers, and PBMs in the 2012–13 Economic Report on Retail, Mail, and Specialty Pharmacies.

Briefly, a 340B covered entity is allowed to purchase and dispense 340B drugs through retail pharmacies. Such contract pharmacies hold the “virtual inventory” of a 340B covered entity. In 2010, the Health Resources and Services Administration (HRSA) permitted eligible entities (including those that have an in-house pharmacy) to access 340B pricing through multiple outside contract pharmacies.

Since the rule change, the number of contract pharmacies jumped sharply. HRSA projects that in 2013, nearly one-quarter of community pharmacies will act as contract pharmacies for 340B entities. Here is Avalere’s data, which corresponds to the HRSA-supplied data in Exhibit 80 (page 133) of my new pharmacy industry economic report.

Most 340B contract pharmacies are community retail pharmacies, allowing 340B pricing to reach a broad set of eligible patients. The new report coyly refuses to disclose the identity. (See its footnote 76 on page 16 of the associations’ report.)

But never fear, dear reader. According to Pembroke Consulting’s research, we found that good ol’ Walgreens is, by a wide margin, the most active 340B contract pharmacy participant. More than 4,000 Walgreens locations acting as contract pharmacies for more than 10,000 340B sites. 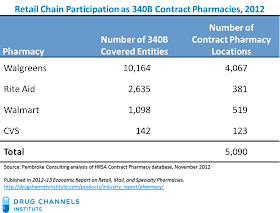 Other chains are targeting the 340B program for expansion. Rite Aid offers a national 340B program with 340B software vendor CaptureRx. From July to November 2012, the number of Rite Aid contract pharmacies grew by more than 800%, from 42 to 381.


Perhaps the presence of retail chains explains why NCPA was a co-sponsor. Ironically, NCPA’s latest America’s Pharmacist magazine has a fairly pro-340B article titled “Community Partnership” (subhead: “Is 340B right for your pharmacy? One owner provides her perspective.”)

THUS CONSCIENCE DOES MAKE COWARDS OF US ALL

Here’s an unsettling aspect of the 340B program not mentioned by the 340B report: By using contract pharmacies, a 340B entity can profit from commercially-insured prescriptions filled by community retail pharmacies.

This process, which is only briefly mentioned in the associations’ report, is illustrated in Exhibit 82 (page 135) of the 2012–13 Economic Report on Retail, Mail, and Specialty Pharmacies.

Using this process, a hospital can profit from a prescription dispensed to an insured beneficiary—after the prescription has been adjudicated, dispensed, and paid by a third-party, commercial payer! The hospital profits from the difference between the pharmacy’s reimbursement (minus fees to the contract pharmacy and 340B intermediary vendors) and a drug’s 340B acquisition cost to the hospital. Rather than earning traditional dispensing spreads, participating pharmacies earn per-prescription fees from the 340B hospital, which has plenty of spare cash.

Safety Net Hospitals for Pharmaceutical Access, a pro-340B lobbying group, even had to remind its members to “avoid phrases such as: Increasing profits; Revenue enhancement; Boost your bottom line.” (See page 37 of 340B "Compliance in an Era of Increased Oversight.")  BTW, SNHPA hates the new report.

THE SLINGS AND ARROWS OF OUTRAGEOUS FORTUNE

What’s more, a manufacturer could pay a 340B discount for a commercial script, on top of a PBM rebate. Ouch! To prevent such double-dipping for Medicaid claims, HRSA just released a policy document clarifying the use of the Medicaid Exclusion File. As far as I know, it’s harder for manufacturers to detect duplicate discounts for commercial business.

Consider this report to be the first major statement in what will become a big battle. Though this be madness, yet there is method in't.
Adam J. Fein, Ph.D. on Thursday, February 14, 2013