However, the song remains the same. As I note last month, 16 of 2013's 190 PDPs have a preferred pharmacy network design. Consistent with the preliminary numbers, more than 4 out of 10 seniors enrolled in one of these 16 plans. Walgreens will benefit from active participation in preferred networks. CVS Caremark’s retail business will face headwinds. See the updated data table and comments below.

While consumers have been showing a whole lotta love for preferred networks, you may think that CMS has been standing around like a fool in the rain. But last week’s 2014 CMS call letter unexpectedly announced that CMS is now “concerned” about potentially higher costs in preferred networks. Check out the surprising excerpt below.

OVER THE HILLS AND FAR AWAY

To get data on PDP enrollment, ramble on to this CMS page: Medicare Advantage/Part D Contract and Enrollment Data. http://www.cms.gov/Research-Statistics-Data-and-Systems/Statistics-Trends-and-Reports/MCRAdvPartDEnrolData/index.html

In Brand New 2013 Part D Data: Nearly Half of Enrollees Chose Preferred Pharmacy Networks, I analyzed the first data release, which covered enrollments accepted through December 5, 2012. This original article has links to each plan’s home page.

WHEN THE LEVEE BREAKS 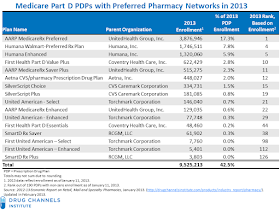 Observations and updated scorecard:
If you feel dazed and confused by narrow networks, see the section starting on page 115 of the new 2012–13 Economic Report on Retail, Mail, and Specialty Pharmacies.

WHAT IS AND WHAT SHOULD NEVER BE

Hmmm, this is an unexpected twist. CMS states that it “…will be contacting the plan sponsors identified in our analysis to validate our findings in the near future.” PDPs better watch out, or they’ll be trampled under foot.