After reviewing the evidence, the CBO concluded that prescription drugs can reduce overall healthcare costs—at least in Medicare. The CBO can now officially account for prescription drugs’ beneficial effects in budget forecasts. For example, the cost of closing the Medicare Part D coverage gap just dropped by 41%!

But by supporting the economic benefits of prescription drugs, the CBO may have inadvertently provided an argument to reverse the long-standing federal program ban on co-pay offset programs, a.k.a., co-pay cards, co-pay coupons. Two-thirds of Medicare Part D prescription drug plans (PDPs) have five-tier designs with high out-of-pocket co-insurance. Does the CBO’s change of heart mean co-pay offset programs should be encouraged, not banned, from federal programs?

Read on and let me know if you agree. 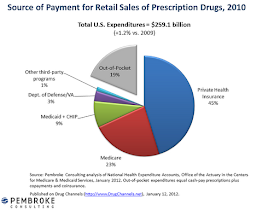 The CBO synthesized results from a small number of studies, and then scaled all changes in medical use with number of prescriptions filled to avoid price effects, such as brand-to-generic substitution.

The official bottom line: A 1.0% increase in the number of prescriptions filled by Medicare beneficiaries would cause Medicare’s spending on medical services to fall by roughly 0.2%. In other words, the government is not afraid of prescription growth, either due to increased utilization or higher adherence.

WHY SHOULD WE CARE?

The CBO’s new prescription-friendly mindset should encourage programs and policies that increase prescriptions, either by increasing utilization or adherence.

This debate is very important for Medicare Part D, despite the shrinking coverage gap. According to Avalere Health’s analysis of 2013 Medicare Part D prescription drug plans (PDPs):
For a specialty drug, the average monthly cost per prescription is usually $2,000 to $3,000, so cost sharing can create an enormous financial burden for seniors. To help patients afford these out-of-pocket expenses, pharmaceutical manufacturers offer co-pay offset programs that cover the patient’s portion. Per A New Reality Check on Co- Pay Offset Programs, nearly 70% of biological drugs have co-pay programs, compared with only 44% of traditional brand-name drugs.

You may recall the CBO’s predictions of fiscal disaster due to the country’s rising healthcare costs. Are manufacturers' co-pay programs part of the solution for patients...and for Medicare?