A New Peek at HMO-PBM Relationships

The Sanofi Managed Care Digest Series just released its 2012-13 HMO-PPO Digest, a great compendium of facts and data about the world of Health Maintenance Organizations (HMOs). The report is free with site registration.

The 2012-13 Digest provides interesting— and as far as I know, unique—how HMOs work with Pharmacy Benefit Managers (PBMs). A few highlights:
Hopefully, this post will give the wonks among us (ahem) useful publicly-available insights on PBM’s relationships with their clients. Let me offer a hearty Drug Channels "Thank You" to sanofi-aventis for again sponsoring this research.

In 2011, national enrollment in health maintenance organizations (HMOs) was 79.5 million, the highest level since 2003. Government beneficiaries—Medicare, Medicaid, and the Federal Employees Health Benefits Plan (FEHBP)—account for 40% of total enrollment. Here’s a summary of 2011 HMO enrollment, by payer type: 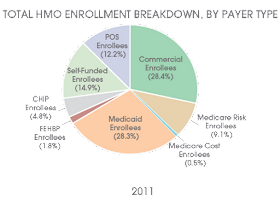 Here are the top five HMO chains, by enrollment:
HMOS AND PBMS

Like other plans sponsors, HMOs use pharmacy benefit managers (PBMs) to administer the HMO’s prescription-drug plan. In 2011, per-member per-year (PMPY) drug expenditures were $575, equal to 13.9% of an HMO’s operating expenses.

The table below summarizes the digest’s data on HMO-PBM relationships. (HMO definitions below.)

Here are the definitions provided in the Digest.