OK, the election is finally over. And President Obama’s re-election pretty much guarantees that price transparency will continue to ripple through the pharmaceutical industry. See Transparency is Here! CMS Exposes Pharmacy Prescription Profit Margins for a look at the first batch of pharmacy acquisition costs and revenue data, from the Center for Medicare and Medicaid Services (CMS).

The Patient Protection and Affordable Care Act (PPACA) also requires CMS to publish weighted average Average Manufacturer Price (AMP) data, which (sort of) show the average multisource (generic) drug prices paid by wholesalers and large pharmacies. With healthcare reform repeal off the table, I expect the AMP figures to be finalized within a few months.

In the meantime, we can draw some firmer conclusions from the 14 months of draft AMP data. Here are two observations from my number crunching, detailed below:
Don’t forget that these AMP data pose a mega-compliance threat for manufacturers, which have to deal with murky and undefined rules. Gee, healthcare reform will be fun!

CMS has now published 14 months of draft data. The most recent data set is from August 2012. CMS only publishes the weighted average data by product group. You can view a list of the specific 9-digit National Drug Code (NDC) level included for each group in File #2. Read the full details at the CMS Federal Upper Limits page.

Because brand-name drugs get weighted into the AMP, the published AMP will generally be HIGHER than the actual average of manufacturers’ generic selling price. For example, August’s “extreme detail” identifies 18 unique NDCs of atorvastatin 20mg tablets (product group 6775). These 18 NDCs represent different package sizes sold by 10 companies, one of which is the original patent holder (Pfizer's Lipitor). Due to the weighting, the brand-name version contributes an ever-diminishing, but potentially meaningful, contribution to AMPs.

The AMP data continue to document very low manufacturer selling prices for many generic drugs. In August 2012, the AMP data included 952 oral solid product groups. Consistent with my previous analyses, more than two-thirds of oral solid generic drugs sell to wholesalers and pharmacies for less than 25 cents per pill. 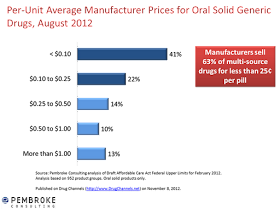 This distribution is similar to the February 2012 data that I analyze in Generic Plavix: Let's Do the Price Limbo.

In Generic Drug Prices are Rising, according to latest AMP data, I introduced the Index of Generic Weighted Average AMPs (IGWAAMPS, pronounced “igg-whamps”). Here's an update.

Over the past 14 months, CMS has published monthly AMP data for anywhere from 719 to 1094 product groups. Not all products groups appear in every month. Only 452 products groups show up in every month since July 2011. To assess whether overall multisource prices rose or fell, I computed an equal-weight index of these 452 product groups using 14 consecutive WAAMP values. I set July 2011 to equal 100. 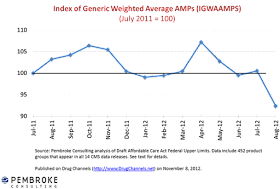 Note that this index only includes drugs with published AMPs for the complete 14-month period, so it excludes any recent multi-source launches. As a sensitivity analysis, I repeated the analysis using the 728 product groups that appear in the 11 months from October 2011 through August 2012. The results were almost identical.

The AMP data are still considered to be in “draft” form, so they are not yet being used for reimbursement, i.e., the Medicaid Federal Upper Limit (FUL) is still being computed as 150% of the lowest published list price plus a “reasonable” dispensing fee. The PPACA redefined the FUL to be AMP multiplied by “no less than 175 percent.”

CMS issued its proposed AMP rule in January 2012, but the data won't convert to “final” form until CMS issues the AMP Final Rule in … early 2013? My friends over at The Pharma Compliance Blog are already begging: Can We Please Have Our AMP Rule Now???

As for me, I'll really miss those dinner-time robocallers. Can't wait until 2016!