Checking in with CVS Caremark

CVS Caremark (NYSE: CVS) posted some impressive financial results last week. Today, I highlight three noteworthy developments:
Has CVS Caremark been smart or lucky? A bit of both, actually. And as I explain below, you won’t hear Wall Street clamoring for a break-up anytime soon.

In August, CVS management explained why they expect to retain at least 50% of the ex-Walgreen’s business. See How CVS Plans to Woo Walgreen’s Ex-Customers. Last week, they upped this estimate to 60%.

The benefit shows up pretty clearly in the chart below, which shows year-over-year change in same-store prescription revenues at Walgreen (NYSE: WAG), Rite Aid (NYSE: RAD), and CVS Caremark’s retail stores. CVS only reports on a quarterly basis, so I simply plotted the quarterly figure in each month for comparison. Note that October’s sales for WAG and RAD were impacted by Hurricane Sandy. 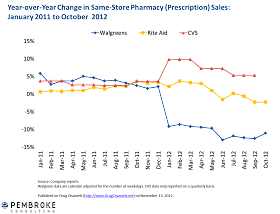 Here’s what CEO and President Larry Merlo had to say on last week’s earnings call:


“Our strong script growth also reflects a significant benefit from the Walgreens-Express dispute. Now similar to last quarter, we estimate that the impasse added 400 to 430 basis points to our script comp in the third quarter, equating to about 6.5 million to 7 million scripts. Now we had expected a $0.05 per share benefit in the third and fourth quarters combined. And in Q3, we realized about a $0.035 benefit.

Now we have been tracking ahead of our retention expectations in the 7 weeks since Walgreens reentered the broadest Express Scripts network. So in the fourth quarter, we now expect at least another $0.025 benefit. And the new estimate assumes that we retain, as I mentioned earlier, at least 60% of the prescription volumes gained from the dispute in Q4, and that's up from our previous estimate of at least 50%. And again these estimates are net of the projected investments we are making to maximize retention…”

Impressive. Some analysts project that Walgreen now has about 40% of its Express Scripts book of business, equal to the 15% that Walgreen’s retained plus the roughly 25% who have come back in the first 7 weeks. Of course, Walgreen decided to stop reporting the sales impact of Express Scripts as soon as it re-entered the network, so we'll never really know the true story.

Maintenance Choice is a good example of how the PBM business provides synergies to the retail pharmacy business.

CVS Caremark’s Maintenance Choice program is a limited (not preferred) network model. Consumers can obtain maintenance medications from either a CVS retail pharmacy or a CVS Caremark mail-order pharmacy. This model permits consumer choice of pharmacy channel (mail or retail) but limits the choice to CVS Caremark outlets.

For both consumers and plan sponsors, Maintenance Choice removes the cost difference between mail and retail dispensing of 90-day maintenance prescriptions. Thus, the payer saves money whenever a consumer fills a 90-day prescription at a CVS retail pharmacy at mail-order pharmacy pricing—instead of three 30-day scripts at a CVS or non-CVS retail pharmacy at presumably higher retail reimbursement levels.

By cutting its retail pharmacy margins on generics, CVS Caremark claims that a plan sponsor’s gross pharmacy spend reportedly drops by up to 4%. Plan sponsors—the pharmacy benefit management clients of CVS Caremark—have been adopting the Maintenance Choice program because of these cost savings. As of September 2012, 1,040 plans totaling 14.7 million covered lives had adopted the program, 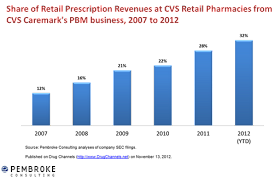 In 2012 YTD, 32% of prescription revenue at CVS pharmacies came from Caremark, up from 16% in 2008. For comparison, in 2012, Caremark represents about 15% of total U.S. retail (non-mail) pharmacy revenues excluding CVS. In other words, Caremark’s share of CVS revenues is about twice its overall national share without CVS.

This synergy, which I first described in May 2009, has grown as Caremark’s business stabilized and added incremental volume, such as the Aetna deal. In 2009, Maintenance Choice accounted for more than half of same-store sales growth in CVS retail pharmacy business. (CVS no longer reports the same-store contribution of the program.)

CVS Caremark claims that these drugs are “high-cost, non-preferred drugs with very low utilization.” About half have co-pay offset programs, an ongoing source of friction between manufacturers and payers. See PBMs Launch a New Attack on Copay Cards.

Self-insured employers tend to adopt a PBM’s national formulary. For manufacturers, knowing when to cave to a PBM’s demands is a key aspect of managed markets strategy.

Although this is a longer-than-average post, I only scratch the surface of this complex company. Pembroke Consulting clients and Gerson Lehrman Group clients can schedule phone calls with me for additional comments beyond what I discuss above.

1 CVS Caremark reports an income statement item in its SEC filings called “Intersegment eliminations,” which is currently defined as follows:

Thus, these eliminations are a proxy for measuring the revenues to CVS retail pharmacy when it fills a script for beneficiaries of a CVS-owned Pharmacy Services (PBM) plan. The chart above shows annual intersegment eliminations as a percent of retail pharmacy prescription revenue.
Adam J. Fein, Ph.D. on Tuesday, November 13, 2012