Cardinal Health (NYSE: CAH) recently filed its 2012 10-K annual report, for the fiscal year ending June 30, 2012. Here are some enlightening disclosures buried within this always-revealing document:
Think of this post as an early look at the 2012-13 Economic Report on Pharmaceutical Wholesalers, which will be arriving in a few weeks.

THE JOY OF SEC

Before getting to the numbers, I want to rhapsodize for a moment about corporate filings with the Securities and Exchange Commission (SEC).

As you probably expect, I enjoy reading annual 10-K filings. Why? SEC filings are a fascinating source of competitive intelligence, although surprisingly few people bother to read them closely. I always suggest that pharmaceutical manufacturers do a deep dive into SEC filings before starting to negotiate a fee-for-service agreement.

Regulatory and legal requirements force companies to disclose important details about their business, resulting in opaque and hard-to-decipher language and presentations. Put more poetically: A 10-K filing is like a bikini. What it reveals is interesting, but what it conceals is essential.

Cardinal Health has the greatest customer concentration among the Big Three drug wholesalers. We estimate that Cardinal’s 15 largest customers account for more than 90% of the company’s U.S. core drug distribution revenues and services.

In 2012, the big three were very big indeed:
As an aside, Walgreen got more bad news with yesterday's surprising announcement that TRICARE was keeping Walgreen out of their network. More on that topic tomorrow.

DON’T KNOW WHAT THEY WANT FROM ME

Cardinal Health is the only wholesaler to report the profitability of its warehouse delivery revenues compared with its direct distribution revenues. I believe the extra details relate to an SEC settlement regarding allegations that Cardinal shifted revenue from non-bulk (operating) revenue to bulk revenue. See Revenue Games at Cardinal Health.

Perhaps surprisingly, the profitability of Cardinal’s bulk customers has trended up in the past three years, from 0.26% in 2010, to 0.38% in 2012. The upcoming customer contract negotiations will certainly reverse this trend.

In Will Walgreens bypass Cardinal Health?, I explain why the biggest pharmacies almost always purchase brand-name drugs—but not generics—via drug wholesalers rather than buying directly from a manufacturer.

But large chain customers also used Cardinal for direct-store deliveries. The 10-K implies (with some math) that $15 billion of purchases from CVS and Walgreen were direct-store distribution, not bulk warehouse deliveries.

The chart below shows Cardinal Health’s three largest customers in FY2012, along with each customer’s estimated share of bulk vs. non-bulk purchases from Cardinal. While all of Express Scripts’ purchases were bulk warehouse deliveries, I estimate that the bulk sales share to Walgreen and CVS were about 75% and 60%, respectively. 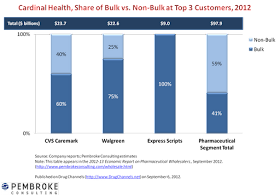 Manufacturers, check your 867 data if you don’t believe me. Consider this reality as you contemplate selling directly to a self-warehousing chain.

I CALL ALL THE SHOTS


“In August 2012, Walgreens issued a request for proposal for pharmaceutical distribution services for the three-year period beginning after the expiration of our contract with Walgreens. In the ordinary course of our business, we frequently are in a competitive bid, or request for proposal, process for pharmaceutical distribution and other business of a customer or potential customer.”

Before he passed away, The Notorious B.I.G. was reportedly an outside advisor to Cardinal’s Board of Directors. (Listen for his comments on the DEA at 3:35 in the video clip below.) As Mr. B.I.G. opined: “It's like the more money we come across, the more problems we see.”