On Wednesday, the Senate Committee on Commerce, Science and Transportation held an eye-opening hearing titled Short-Supply Prescription Drugs: Shining a Light on the Gray Market.

The Committee simultaneously released a report documenting gray market activity by some well-known companies. Briefly:
Check out the diversion maps below for a peek at how these companies participate—perhaps inadvertently—in the gray market. There was conflicting witness testimony about who should be blamed. (Links below.) I’ll let you make up your own mind on those competing arguments.

The Senate hearing is part of the investigation launched by Rep. Elijah E. Cummings of Maryland. See Congress Asks Where Gray Market Drugs Come From.

The full report—Shining Light On The “Gray Market”: An Examination Of Why Hospitals Are Forced To Pay Exorbitant Prices For Prescription Drugs Facing Critical Shortages—is worthwhile reading.  Key observation: 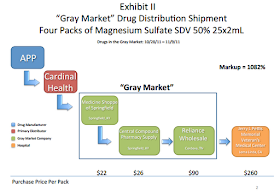 Here’s one with Bedford Laboratories, AmerisourceBergen and Walgreens. 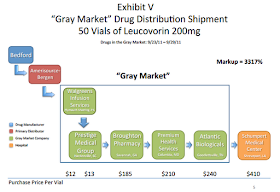 Needless to say, the companies operating in the “gray market” boxes were generally acting unethically and illegally. The report details their many transgressions, including establishing fake pharmacies to buy short-supply drugs or selling their entire inventory into the secondary market rather than dispensing to patients.

Witness testimony included:
I encourage you to read the testimony yourself and make up your own mind. Unlike certain drugs, there's no shortage of blame.