Kudos to the Department of Justice for catching the crooks, but … Yikes! Anyone interested in pharmaceutical supply chain security should check out the DOJ’s diversion map (reproduced below).

Alas, we once again observe diverted products finding their way back into the legitimate supply chain, when a pharmacy purchases from a shady vendor. Perhaps you won’t be surprised to find out that New York is one of many states without pedigree requirements.

For full details read the Complaint and Indictment.

The Manhattan U.S. Attorney provided this helpful schematic of the scheme: 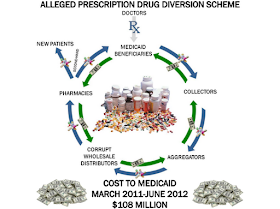 And here’s how the alleged plot allegedly worked:
WHO?

The indictment doesn't identify the pharmacies or “corrupt distribution companies" (CDC) so we can't name names. However, I'm willing to bet that none of the CDCs are Authorized Distributors of Record (ADRs) for any pharmaceutical manufacturer.

One big player was “a co-conspirator not named as a defendant” who “controlled and operated an organization of individuals and Corrupt Distribution Companies in Texas, Nevada, Utah, Alabama, and elsewhere.”

Three of those four states actually have pedigree legislation, but that doesn’t matter because the buyers appear to be in legislation-free New York. See the HDMA’s map of Distributor Licensing and Pedigree Requirements by State.

In one instance, a batch of second-hand drugs was sold by this organization to “a New York-based national healthcare company that provided specialty pharmacy and disease management services focused on HIV/AIDS patients.” I highlighted the appearance of stolen products in legitimate pharmacies in at least three previous articles: Why is Stolen Shire Product Being Returned for Credit?, How did stolen GSK product end up in pharmacies?, and Drug Theft + Diversion Gets Bigger :(.