Who Will Pay for Prescription Drugs in 2021?

In The Outlook for Drug Spending (With or Without ACA), I examine the latest drug spending forecasts from the Centers for Medicare and Medicaid Services (CMS). Today, I look at who will be paying for all of these drugs.

Here are four key insights about the 2021 drug market, assuming that the Patient Protection and Affordable Care Act (ACA) remains in place:
Read on for a look at the past, present, and future of payers. Pharmaceutical manufacturers need to consider how contracting will change as traditional private insurance declines. Meanwhile, PBMs will be gearing up as more people get coverage, although the business will shift to health plans at the expense of self-insured employers.

I once again rely on forecast data from the National Health Expenditure Data Projections page. The economists at CMS graciously provided me with certain unpublished data to compute the sources of payment if the ACA does not go into effect.

Note that I also estimated drug spending via private insurance purchased via exchanges. The PPACA’s growth in coverage is projected to come via state-run Health Insurance Exchanges (HIE), which are mandated to be a state-established governmental agency or nonprofit entity. CMS classifies coverage via HIE as "private insurance."

I find this classification to be a bit misleading about the sources of payment because a large portion of so-called private insurance coverage will actually be paid for by the government through subsidies. According to the CBO, 81% of individuals purchasing their own coverage through the Exchanges will receive federal subsidies that reduce the cost of purchasing health insurance coverage.

Therefore, I have estimated exchanges’ drug spending share using the CMS’ health insurance enrollment data. I assume that per-capita drug spending will be similar between people with employer-sponsored private and those with private insurance from an exchange.

The chart below summarizes payment sources since 1970. 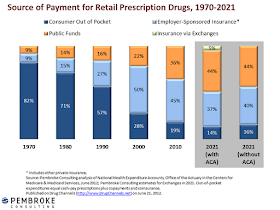 Assuming that the ACA remains in place, here's what will happen:
The last column in the chart above shows CMS’ unpublished estimates if the ACA is overturned. Public funds are still expected to crowd out private insurance, although the effect will be more modest. The consumer’s share will be higher due to loss of various subsidies.

Surprised? Delighted? Depressed? You have good reasons for all three feelings.