The Outlook for Drug Spending (With or Without ACA)

Soon, we'll all learn the Supreme Court’s decision about the Patient Protection and Affordable Care Act (ACA). On a bed of nails, they make us wait.

To pass the time, let’s look at the brand-new forecasts for health care spending from the Centers for Medicare and Medicaid Services (CMS). The complete forecast is summarized in the latest Health Affairs: National Health Expenditure Projections: Modest Annual Growth Until Coverage Expands And Economic Growth Accelerates (free download).

My number crunchification uncovered the following data points about drug spending:
CMS has reduced its growth forecasts substantially due to ongoing economic weakness. Read on for the factors behind the new forecast, both with or without ACA.

FYI, NHE does NOT measure total U.S. spending on prescription drugs. Sales through outpatient retail channels are only about 75% of total pharmaceutical manufacturer sales. Unfortunately, there is no way to figure out drug spending in other NHE categories because spending is bundled with inpatient procedure fees. For example, some portion of "Hospital care" includes an unknown amount of drug spending. 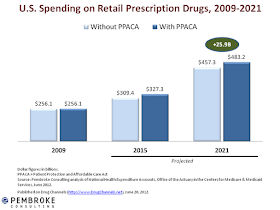 CMS attributes the ACA’s utilization boost to three factors:
SEE THE THORN TWIST IN YOUR SIDE

Last July, CMS made the following (more optimistic) projections:
So, what happened?

Oh, just a wee little recession and a weaker-than-normal recovery. For private health insurance, CMS points to three factors:
The chart below compares the annual growth rates in the July 2011 and June 2012 forecasts. (Both forecasts include the impact of the ACA.) In the current forecast, drug spending will grow at a compound average rate of 6.0% from 2011 to 2021—just a hair above the growth rate of overall health expenditures. 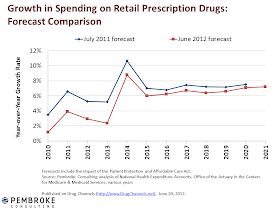 As you can see, CMS has lowered its forecast by 2 to 3 percentages points for 2010 through 2013, and by less than 1 percentage point in later years of this decade. Compounding of small growth rate changes translate into about $30 billion less in total retail sales by the end of the decade.

Tune in tomorrow, when I'll look at who will be paying for all of these drugs. The answer may not surprise you, but it might depress you.

Until then, check out this interesting video that analyzes the timing of the Supreme Court's decision.