Who Will Pay for Prescription Drugs? 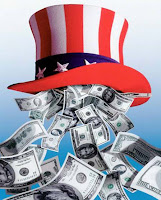 In Tuesday’s State of the Union address, President Obama said that we must “address the crushing cost of health care.” (Full text) Coincidentally (?), the boffins at CMS released their newest national health care spending projections through 2018 on Tuesday morning.

The latest forecasts now show public funds taking over prescription drug spending in 2010 – at least 7 years earlier than last year's forecast. If you believe these just-released CMS projections, then the government will have a very strong hand in managing retail drug spending and shaping the future of drug channels.

Savor the numbers for yourself here:
In Who Pays for Prescription Drugs?, I point out that public funds paid for 36 percent of total retail drug spending in 2007. The majority of these public funds came from CMS programs: Medicare, Medicaid, and State Children’s Health Insurance Program (SCHIP). The private health insurance share peaked in 2001 at 50 percent. Since then, public funds have been crowding out both public and out-of-pocket payments.

Here is an updated chart that shows how the payment source for prescription drugs (share of dollars) has changed during my lifetime along with the new 2017 forecast. I include the intermediate years to give you a better sense of the changing private insurance story. 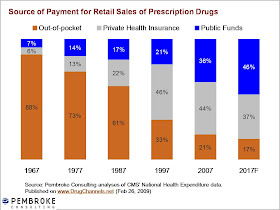 Note that CMS projects that public funds will pay a greater share of outpatient retail prescription spending than private insurance starting in 2010. This is a major change from last year’s forecast, which showed private insurance with a greater share than public funds through 2017. According to my number crunching, the difference comes from CMS’ substantial under-forecast of the 2007 Medicare spending:

Looking ahead, CMS expects the growth rate in prescription drug spending to remain below 5 percent through 2010 and then climb to 6.6 percent by 2013 as “use increases in response to projected improving economic conditions and to the effect of new indications of currently approved drugs.” CMS then projects that growth in drug spending will accelerate after 2013 as the generic dispensing rate levels off and specialty drugs spending grows.

While useful benchmarks, you should probably be somewhat skeptical given CMS’ track record. As physicist Niels Bohr, once said: “Prediction is very difficult, especially if it's about the future.”