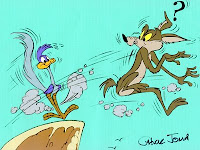 Beep, Beep! Here’s a reason to be cheerful about the pharmacy industry’s prospects for 2009.

Total retail sales plunged off a cliff by 5.1% in the fourth quarter last year -- the biggest drop in a generation.

Pharmacy sales defied this overall retail trend and actually grew by 4.1% in Q4:2008 compared to Q4:2007 – despite the consumer meltdown, the slowing prescription market, $4 generics, etc.

As you can see, there was no statistical relationship between pharmacy sales and overall retail sales over the past six years. The measured correlation was negative (-13%) for this 24 quarter period. Note that this nine-point performance gap is entirely consistent with the historical evidence that I show in Will the economy hurt drug stores?

Gosh, pretty soon we’ll all have to start taking Despondex!

Want another implication of the fact that pharmacy is an “uncorrelated" retail sector? Even a poorly managed pharmacy has a better chance of surviving the recession that the average well-run retail store.

A few technical comments for my uber-geek readers: The statistical correlation relates the *change* in sales at pharmacies to the *change* in retail sales. Why? If you correlate the actual dollar value of sales, then the correlation is artificially inflated because there is a common time trend a.k.a. a unit root. In other words, retail sales of all kinds tend to grow over time, so correlations of dollar sales levels often just show the correlation of the time trend. Taking the first difference (change in sales) removes the time trend and exposes the true relationship.
Adam J. Fein, Ph.D. on Tuesday, February 17, 2009