IMS’ National Sales Perspectives (NSP) reports sales *into* each distribution channel tracked by IMS. In other words, the data represent product purchases from wholesalers or manufacturers, not retail pharmacy sales to patients. (See the original post and comments for further details.)

In a comment on my original post, I hinted that a data reclassification may have artificially boosted the 2007 figures and made the historical comparison misleading. Well, it turns out that IMS shifted sales to Cardinal Health ()’s Medicine Shoppe pharmacy franchises from “chains” to “independents” in January 2007.

To be fair, IMS claims to have issued a product information bulletin (PIB) to its customers at the time of the switch.

However, IMS neglected to restate the historical data reported publicly on its website, which meant that growth by independents was overstated and growth by chains was understated. To further confuse the reported numbers, IMS apparently did not make a comparable adjustment in the data on number of prescriptions.

An IMS insider recently shared the official adjustment factors for 2007 with me. The chart below presents my computation of the data on a historically comparable basis, i.e., I count Medicine Shoppe with “chains” to be consistent with previous data. (I included the 2006 growth rate for comparison.) 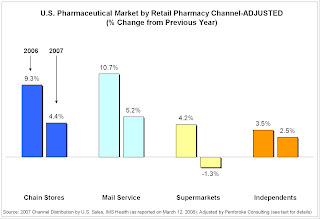 In contrast to my original post, purchases by mail order grew the fastest in 2007, followed by chains. Independents grew by only 2.5 percent (versus 8.4 percent in the original post). Perhaps one bright spot for independents is that the growth rate declined at a slower rate.

In my opinion, IMS should now restate the historical data to create a comparable time series of channel distribution data. It was irresponsible for IMS to publish the data without clarification. Analysts and consultants like me follow these top-line data. These data are also used as inputs for statistical publications by NACDS and HDMA.

IMS has recently suffered some embarrassing public data disputes with Novartis, Millennium Pharmacueticals, and other drug makers. In contrast, their goof-up on channel sales seems to derive from sloppiness rather than faulty data.

Let’s just be thankful that there were no hanging chad.