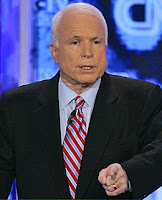 In a particularly lyrical moment last May, I wrote: "To paraphrase Dennis Miller, importation has been declared dead more times than a narcoleptic Jason Voorhees. So expect to see this political crowd-pleaser resurrect itself in time to lurch around Washington during the '08 elections."

Sadly, my forecast came true on Saturday during the Republican debate in New Hampshire when Senator John McCain (R-AZ) spouted a load of nonsense about both drug pricing and importation. I have a lot of respect for the Senator, who is expected to do well in today's New Hampshire primary. But he was waaaaay off base on his knowledge of the pharma industry.
What Senator McCain Said

Senator McCain claimed that the attorney generals of South Carolina and Iowa have “sued the pharmaceutical companies because of overcharging of millions of dollars of Medicaid costs to their patients.” Sen. McCain then added:

Pandering to the Uninformed

The typical voter has no idea how much Senator McCain misrepresented the Medicaid lawsuits, which have nothing to do with any top secret cover ups.

In reality, the lawsuits are based on allegedly “excess” spreads between Average Wholesale Price (AWP) and a retail pharmacy’s acquisition price under Medicaid. The problems with AWP are well known and hardly count as a cover up in 2008. (I discuss the Iowa lawsuit in Judge Saris on Fictitious AWPs.)

I also didn’t hear the Senator demonizing the pharmacies that profit from AWP spreads. And as I recall, it was the retail pharmacists (not manufacturers) that successfully sued the government to prevent the publication of actual average price data.

Senator McCain then proceeded to falsely link the AWP lawsuits to importation, although there is no connection and importation legislation won’t save money for consumers anyway.

I guess that I shouldn’t be surprised because Senator McCain has consistently made demonstrably false statements about importation. Consider this chestnut from last November:
"These are drugs being reimported. They go to Canada and then they can come back in. It's a strawman to say that a country like Canada could not be responsible for safe drugs to be brought into our country." (Source: McCain Calls for Drug Reimportation.)

The Senator has spoken eloquently about the foreign enemies of our country. So why does he believe in the fallacy of safe Canadian sourcing? He must know that diverters and criminals will quickly take advantage of a more porous supply chain.

Surprisingly, Rudy Guiliani did not challenge McCain, even though his firm wrote a 2005 report that highlighted how “Organized Criminals, Drug Traffickers and Terrorists” could exploit a U.S. drug importation scheme. (See Examination and Assessment of Prescription Drug Importation from Foreign Sources to the United States.)
--
Perhaps my standards are too high, but it certainly looks like straight talk has gone right out the window. On the bright side, the election will be over in only 301 more days!
Adam J. Fein, Ph.D. on Tuesday, January 08, 2008