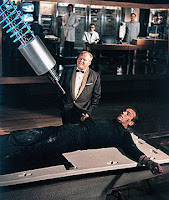 “In spite of being warned by DEA about the characteristics of rogue internet pharmacies, Cardinal Health’s Auburn branch distributed nearly 18 million dosage units of hydrocodone to retail pharmacies between January 1, 2007 and September 30, 2007. Horen’s Drug Store purchased 605,000 dosage units of hydrocodone from Cardinal Health between March 1, 2007 and September 30, 2007.”

Sadly, diversion via retail and online pharmacies is now a major danger point for patients, especially those seeking controlled substances without prescriptions. (Just ask Al Gore III where he got his Vicodin.) Pedigree, RFID, and other more exotic security measures will do nothing to protect stupid people from unscrupulous sellers. Hopefully, these new systems will improve a manufacturer's ability to detect diversion and better monitor the behavior of wholesalers and pharmacies.

Cardinal is not alone is being hoodwinked by shady pharmacy customers. AmerisourceBergen (ABC) had its DEA license suspended in April at its Orlando site. At the time, the DEA claimed that AmerisourceBergen did not maintain effective controls against diversion of controlled substances (hydrocodone again!) to four internet pharmacies.

I can't find any public statements from Cardinal about customer monitoring since their NY agreement was announced 11 months ago. However, the DEA's statements indicates that the company doesn't have a viable system in place yet.

The DEA’s move is also personally dispiriting because Mark Parrish, former CEO of Cardinal Health's distribution division, was a very public proponent of industry-wide initiatives to improve the safety of the medicine supply chain.

As Auric Goldfinger once said: "Once is happenstance. Twice is coincidence. The third time it's enemy action." Let's hope that Cardinal Health gets things under control soon.
Adam J. Fein, Ph.D. on Friday, November 30, 2007