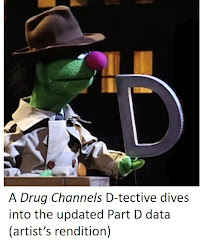 Open enrollment is under way for the 2023 Medicare Part D plans. Our exclusive analysis of Center for Medicare & Medicaid Services’ (CMS) data reveals that preferred cost sharing pharmacy networks will maintain their dominance as an established component of Part D benefit design.

For 2023: Below, I provide historical data on preferred networks’ growth and update the top companies’ 2023 offerings.

The largest companies made only minor changes to their 2023 stand-alone plans, after streamlining their 2022 plans. I also update our analysis of the prevalence of preferred networks in three different types of MA-PD plans.

In upcoming articles, I’ll investigate what we can deduce from chain and independent pharmacies’ participation in the major 2023 preferred networks.

A preferred network gives consumers a choice of pharmacy while providing financial incentives to use the pharmacies that offer the payer lower costs or greater control. A consumer with a preferred network benefit design retains the option of using any pharmacy in the network. However, the consumer’s out-of-pocket expenses will be higher at a non-preferred pharmacy.

Our analysis of stand-alone PDPs eliminated the following plans from the sample:
Our analysis of Medicare Advantage (MA) plans included only those plans that offered basic or enhanced drug coverage, and excluded plans from Puerto Rico. We identified unique plans based on the combination of Contract/Plan/Segment ID.

Our final PDP sample included 72 PDPs, which will operate 804 regional PDPs:
Here are the total number of MA-PD plans, by type Click here to review our 2022 analysis. 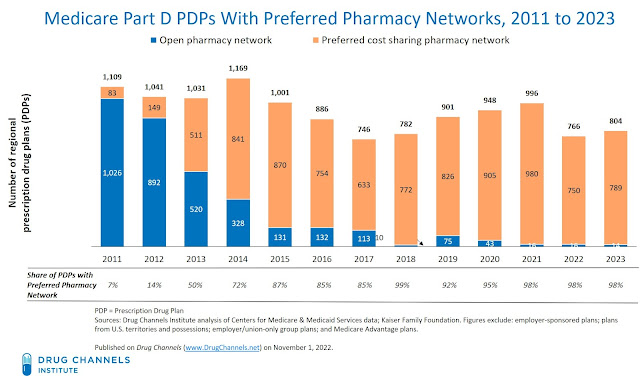 For 2022, the number of stand-alone PDPs dropped by -23%, from 966 to 766 plans. As we discussed in last year’s analysis, this drop reflected consolidation among plan sponsors. For 2023, the number of plans rebounded, to 804 plans. The increase was due almost entirely to the Mutual of Omaha’s introduction of a third plan option (discussed below).

Notably, the share of preferred provider organizations MA-PD plans with preferred plans dropped, from 75% of plans in 2022 to 55% of plans in 2023. I speculate that plans are trying to make Medicare Advantage more attractive to seniors by giving them more flexible pharmacy choices.

Part D enrollment in MA-PD plans has increased over time, while enrollment in stand-alone PDPs has decreased in recent years. (source) I suspect more open networks are contributing to this trend.

Here are the 2023 highlights from the eight major companies with national stand-alone PDPs. These companies account for 725 (90%) of the total 804 PDPs. None of these companies’ plans will have an open retail network. All of the plans have preferred cost sharing networks.
For more on the economics and strategies of narrow networks, see Chapter 7 of our 2022 Economic Report on U.S. Pharmacies and Pharmacy Benefit Managers.