Five Surprising Facts About GoodRx and the Discount Card Market

Last month, IQVIA quietly released a fascinating new report on discount cards. (Link below.) The research was sponsored by the Association for Accessible Medicines (AAM).

Below, I highlight three unexpected findings from the data regarding GoodRx’s market position, when people use discount cards, how much they save, and why PBMs should still be worried about this market.

There’s a lot to unpack about the growing discount card market. As you’ll see, this report provides valuable insights about a market that seems stacked against patients.

As always, I encourage you to review the original IQVIA report for yourself: Pharmacy Discount Card Utilization and Impact.

As a reminder, consumers who do not use a third-party payer for prescriptions can use a discount card program. These PBM-backed programs pass some portion of rebates and network discounts directly to patients at the point of sale. Patients therefore avoid paying a retail pharmacy’s usual and customary (U&C) retail price for their prescriptions.

You may find it useful to review my previous articles about GoodRx and the discount card business model: I place discount cards within the broader context of patient-paid prescriptions in Section 4.3. of DCI’s 2022 Economic Report on U.S. Pharmacies and Pharmacy Benefit Managers.

Here are my key observations from the IQVIA report: 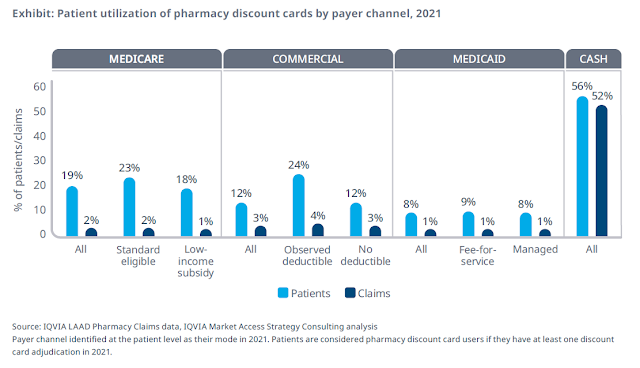 But look carefully at the light blue bars in the chart above. I was surprised that one in five Part D patients and one in eight commercial patients had used a discount card at least once during 2021. The proportion was closer to one in four for patients with deductibles.

It’s not your imagination: GoodRx has grown quickly to become the biggest discount card player. IQVIA calculates that Good Rx accounted for 2.5% of prescription claims in 2021, up from only 0.5% in 2017. Consequently, its market share has grown dramatically, from 14% of discount card claims in 2017 to 46% in 2021. 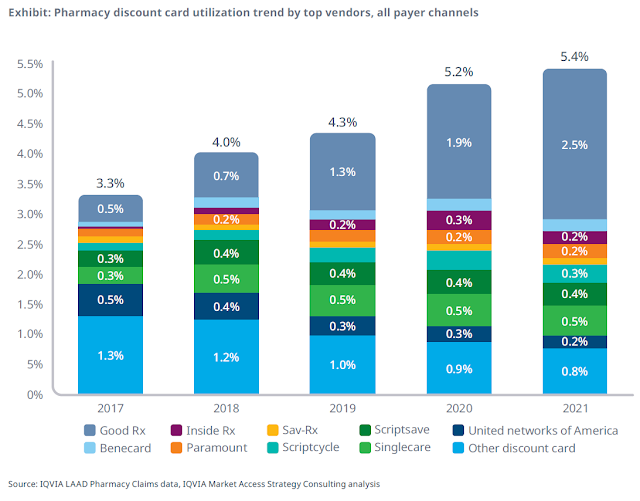 I attribute GoodRx’s dominance to its combination of a simple interface, an easy-to-use app, aggressive marketing, and competitive pricing from multiple PBMs.

Alas, GoodRx’s market share took a hit in 2022 due to the kerfuffle around its unexpected reliance on Kroger pharmacies. According to recent IQVIA data, GoodRx’s August 2022 share had dropped to 2.2% of prescription claims—down from its peak of 2.7% in March 2022.

3) Many patients used discount cards to bypass their plan’s limitations.

Most people use a discount card after their insurance plan had rejected the prescription. (These results are shown as the light blue slice in the pie charts below.) 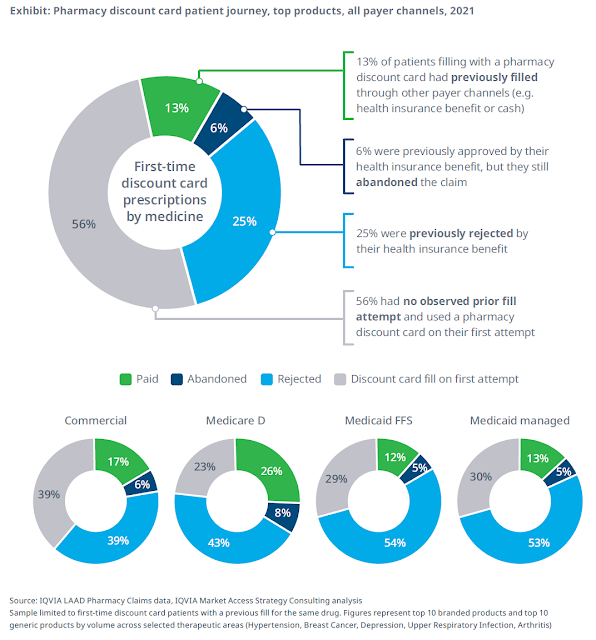 For instance, IQVIA classified discount card claims from 39% of commercially insured beneficiaries and 43% of Medicare Part D beneficiaries as “previously rejected.” Note that the IQVIA sample here was limited to first-time discount card patients with a previous prescription fill for the same drug. (The overall figure of 56% includes prescriptions filled by uninsured, cash-paying patients.)

Page 13 of the report shows that utilization management explains many of these results. Rejections were tied to such factors as an NDC block, “refill too soon” limits, prior authorization, and step edits. Put another way, patients sought out the drug prescribed by their physician, regardless of their plan’s benefit management. Apparently, the patients’ pharmacists did not try to—or were not asked to—help overcome these access barriers.

Page 13 also shows that some people apparently attempted to fill prescriptions after their coverage was terminated. So I guess they weren’t really insured?

4) Many people tried discount cards before checking their insurance.

The chart above also shows some highly puzzling behavior. The category labeled “No observed prior fill” represents any patient whose first claim for a given product was filled using a discount card.

As you can see from the grey pie slices, many patients—23% of Medicare Part D beneficiaries and 39% of people with commercial insurance—used a discount card before attempting to use their insurance.

Were people so skeptical of their plans that they didn’t even ask about their out-of-pocket cost? Did they want to fill at a pharmacy that was excluded from their plan’s network? Were their deductibles so large that they believed it was not even worthwhile using their plan? Or did they know that the plans would put up so many barriers that they just gave up before even attempting to scale  a paperwork mountain?

5) Two-thirds of insured patients paid the same or less with a discount card.

Page 15 gets to the key question: How much do insured patients save when using a discount card?

According to IQVIA, nearly two-thirds of patients with commercial insurance or Medicare Part D paid the same or less when using a discount card instead of using their insurance. Some saved much more: 19% of Part D patients and 9% of commercially insured patients saved $20 or more with a discount card.

Note that these figures apply only to those patients who found a discrepancy between their plan’s out-of-pocket cost and the cost when using the card. That’s why it doesn’t mean every patient would save this much money.

These data point to the potentially disruptive effect of discount cards that allow a patient with insurance to benefit from a discount card. The patient can reduce their out-of-pocket expenses by using a discount card to access the rates of another PBM—or possibly even another network from their own plan’s PBM.

As I described last year, discount cards undermine the premise of pharmacy benefit management. Someone—consumers, their employers, and/or the government—paid insurance premiums for a pharmacy benefit managed by a PBM. Yet our system’s weird pricing math can still make it worthwhile for people to bypass their plan’s out-of-pocket costs and PBM network rates in favor of a different PBM’s rates.

It's an impressive card trick that requires everyone to believe in this prescription magic.