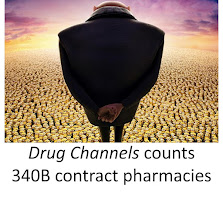 Despite what you may have heard, pharmacy participation in the 340B Drug Pricing Program continues to thrive.

Drug Channels Institute’s latest analysis reveals that an astonishing 32,000 pharmacy locations—more than half of the entire U.S. pharmacy industry—now act as contract pharmacies for the hospitals and other healthcare providers that participate in the 340B program. Over the past 12 months, the number of pharmacies in the program has grown by more than 2,000 locations.

What’s more, five multi-billion-dollar, for-profit, publicly traded pharmacy chains and PBMs—CVS Health, Walgreens, Cigna (via Express Scripts), UnitedHealth Group (via OptumRx), and Walmart—account for three-quarters of all 340B contract pharmacy relationships with covered entities. Is this really what Congress intended when the 340B program was established in 1992?

Manufacturers’ contract pharmacy restrictions have slowed the out-of-control program growth—with some unanticipated benefits for the biggest players. Read on for details and my commentary below.

For more on 340B and the specialty market, join me for my upcoming July 29 live video webinar, Specialty Drugs Update: Trends, Controversies, and Outlook.

The 340B program mandates that pharmaceutical manufacturers provide outpatient drugs to certain healthcare providers—known as eligible covered entities—at significant discounts. The Health Resources and Services Administration (HRSA), an agency of the U.S. Department of Health and Human Services, oversees the program through its Office of Pharmacy Affairs (OPA).

Over time, HRSA has introduced subregulatory guidance permitting covered entities to access 340B pricing through an unlimited number of contract (external) pharmacies. The most significant expansion came in 2010, when HRSA issued final guidance permitting covered entities to work with an unlimited number of contract pharmacies. These actions remain controversial and are the subject of complex, multiparty litigation.

Two other observations on the role of contract pharmacies in the 340B program: The contract pharmacy process is complex and confusing. For a comprehensive deep dive, see Section 11.5 of our 2022 Economic Report on U.S. Pharmacies and Pharmacy Benefit Managers.

In profiling the 340B contract pharmacy market, Drug Channels Institute examined HRSA’s Contract Pharmacy Daily Report, as published on June 30, 2022. We screened out all contracts that had been terminated before that date. Using our proprietary database, we classified all contract pharmacy locations by parent organization. Most chains and many PBM-owned pharmacies are listed with multiple alternate names.

Since HRSA’s 2010 change in guidance, the number of pharmacy locations in the 340B program has skyrocketed. 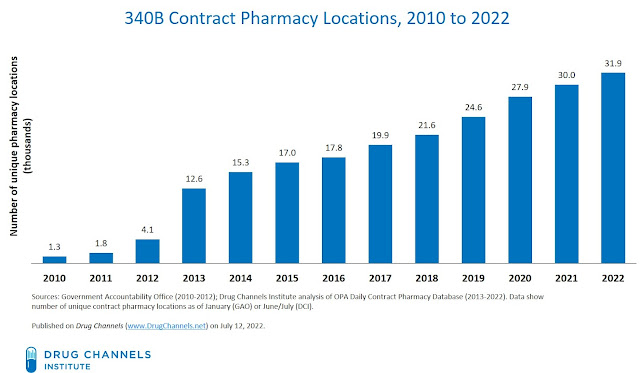 Here are some observations on this never-ending growth: BTW, I’ve been highlighting the out-of-control 340B market for a loooong time. Check out 2013’s prescient The Coming Battle Over 340B Contract Pharmacies.

Consistent with our previous analyses, companies with retail pharmacies account for a majority of the 340B program’s total contract pharmacy locations. These companies include Walgreens, CVS Health, Walmart, Rite Aid, Kroger, and Albertsons.

The chart below shows the five largest contract pharmacy participants based on the total number of relationships with 340B covered entities. These companies are also among the largest U.S. pharmacies by prescription revenues. 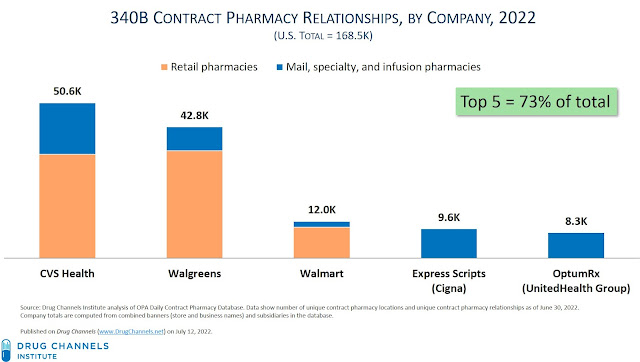 These data highlight the complex ways in which the 340B program interacts with the pharmacy and PBM industries: DESPICABLE WHO?

Eighteen manufacturers have announced controversial new policies related to covered entities’ contract pharmacies in the 340B Drug Pricing Program. Specific policies vary by company, but most manufacturers require a covered entity to use an on-site pharmacy and/or designate a single, external contract pharmacy. Check out this AmerisourceBergen webpage for summaries of these policies.

These restrictions appear to be having at least three primary effects: The 340B Drug Pricing Program has become the second-largest government pharmaceutical program, based on net drug spending. But unlike such programs as Medicare Part D and Medicaid, 340B lacks a regulatory infrastructure, well-developed administrative controls, and clear legislation to guide the program.

The 340B program makes even less sense than watching a movie while wearing a suit and carrying bananas. But considering the big money players involved, I remain skeptical about the prospects for timely, appropriate legislative reform of the 340B program. Until then, expect the profiteering to continue.