This week, I’m rerunning some popular posts while I prepare for tomorrow's live video webinar: Drug Channels Outlook 2022. Hope you can join me! 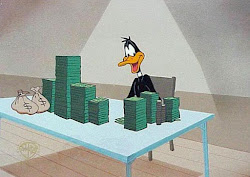 Cardinal Health recently released the annual report for its 2021 fiscal year, which ended on June 30. See the links below.

Today, I delve into the financials behind Cardinal’s relationship with its largest customer, CVS Health. In Cardinal’s 2021 fiscal year, CVS purchased more than $42 billion in pharmaceuticals from the wholesaler—about double the figure from 10 years ago. The new report also reveals that CVS Health’s payment terms with Cardinal give the wholesaler an often-overlooked cash flow benefit.

Like McKesson, however, Cardinal Health has discovered that CVS is its worst best friend.

Longtime readers know how much I (truly) enjoy Securities and Exchange Commission (SEC) corporate filings. Regulatory and legal requirements force companies to disclose important factual details about their businesses. These filings offer a fascinating—if opaque—source of competitive intelligence that surprisingly few people bother to read closely. I’ve been told that even some CVS Health executives are unaware of how much information its biggest suppliers are required to reveal.

ICYMI, I provided a comparable analysis of McKesson in How CVS Health Drives McKesson’s Distribution Financials.

The chart below traces the evolution of Cardinal Health’s sales to CVS since 2011. We estimate that in Cardinal’s 2021 fiscal year, its sales to CVS Health were more than $42 billion—up by $2.5 billion (+6%) from the previous year’s figure. Purchases by CVS Health account for about 30% of Cardinal’s U.S. drug distribution business. 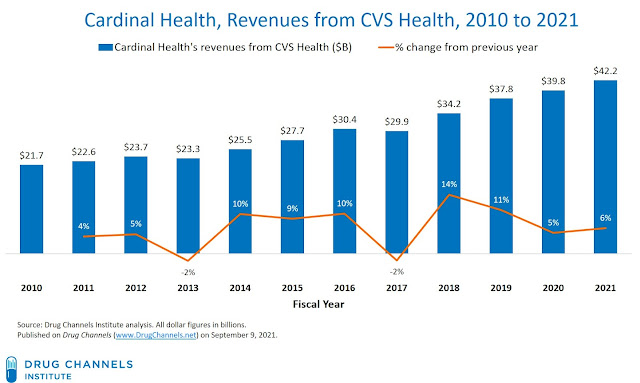 This becomes clear when we examine the company’s cash conversion cycle, which measures how many days it takes a wholesaler to convert inventory purchases into cash from its customers. This cycle combines the following three elements: The cash conversion cycle equals [DSI + DSO - DPO].

For its 2021 fiscal year, Cardinal’s overall cash conversion cycle was slightly negative (-1 day). This figure reflects its entire business, which includes significant revenues and costs associated with medical-surgical products. These figures also vary by customer and product type. We estimate that Cardinal Health’s cash conversion cycle for its pharmaceutical business is lower—i.e., more negative—and closer to the cycles at AmerisourceBergen and McKesson.

The slightly negative cash conversion cycle means that, on average, Cardinal Health got paid for the products it sold at roughly the same time that it had to pay for those products.

For more on the importance of the cash conversion cycle to wholesalers’ businesses, see Section 5.3. of our 2020-21 Economic Report on Pharmaceutical Wholesalers and Specialty Distributors. We will release the 2021-22 edition in early October.

CVS Health’s scale has allowed it to negotiate extremely favorable rates with its wholesale suppliers, McKesson and Cardinal Health. DCI estimates that Cardinal Health’s operating profit from CVS is below 0.4%. Hence, a favorable cash conversion cycle is essential.

You might also recognize that this super-low margin reflects the Golden Rule of the Channel: Whoever has the gold gets to make the rules.