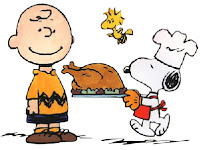 Happy Thanksgiving, everyone! Before you stretch your stomach, stretch your mind with our extra-stuffed helping of food for thought. In this issue: P.S. Please join the nearly 13,000 consumers of my daily commentary and links to neat stuff at @DrugChannels on Twitter. You can also find my daily posts on LinkedIn, where I have more than 21,000 followers.

Please join me for my upcoming live video webinar, Drug Channels Outlook 2022, on December 17, 2021, from 12:00 p.m. to 1:30 p.m. ET. Hundreds of people from your competitors, customers, and suppliers have already signed up. Will you be there, too?

This article analyzes a highly rebated brand-name insulin as used by a consumer with a high-deductible health plan. As you can see from its chart below, the patient pays more than twice the true discounted net price of the drug. Meanwhile, the health plan pockets a large rebate. 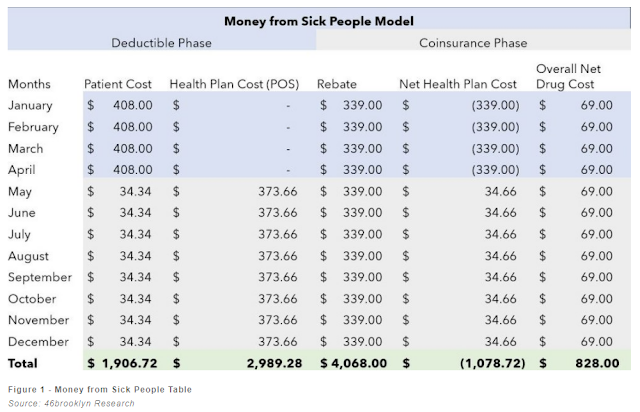 Insulin exemplifies the warped economics of the U.S. drug channel, as I noted a few weeks ago in Why PBMs and Payers Are Embracing Insulin Biosimilars with Higher Prices—And What That Means for Humira .

Nearly three years ago, I explained these issues to a general business audience in a Wall Street Journal article, Don’t Blame Drug Prices on ‘Big Pharma’. Unfortunately, little has changed.

Estimation of the Share of Net Expenditures on Insulin Captured by US Manufacturers, Wholesalers, Pharmacy Benefit Managers, Pharmacies, and Health Plans From 2014 to 2018, JAMA Health Forum

To complement the 46brooklyn analysis, I highly recommend this fantastic article from researchers at USC’s Schaeffer Center. They examined the gross-to-net bubble for insulin.

While insulin products’ list prices rose, the net prices received by manufacturers dropped. Meanwhile, the drug channel—pharmacies, PBMs, and wholesalers—enjoyed skyrocketing funds. The authors compute that the channel’s share of gross-to-net grew, from 13% of funds in 2014 to 43% in 2018.

I appreciate that the authors cited Drug Channels Institute’s research. For some reason, however, they neglected to mention SpongeBob SquarePants, our honorary mascot of the gross-to-net bubble.

Kudos to Nephron Research’s Eric Percher. He finally got CVS Health to acknowledge that the 340B program is driving its PBM profit per script. Here’s the key interaction from CVS Health’s most recent earnings call: 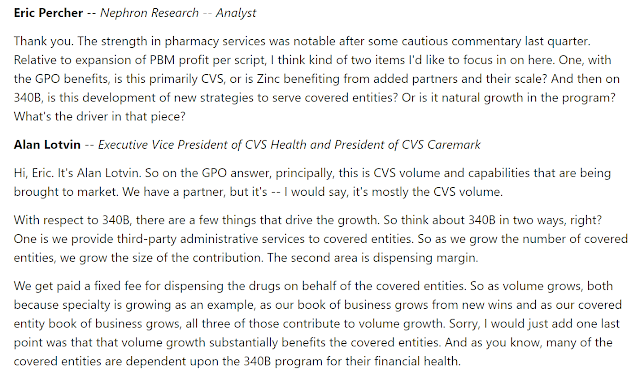 Here’s my deconstruction of this quote: I wonder if any of the other major players will ever acknowledge their 340B involvement on the record.

For a full analysis of 340B’s role in the pharmacy and PBM industries, see section 11.5. of our 2021 Economic Report on U.S. Pharmacies and Pharmacy Benefit Managers.

A disrupting force, or ‘just another mail order pharmacy’? How Amazon Pharmacy stacks up a year after launching, STAT

Guess what! Amazon has not yet disrupted the entire U.S. healthcare system. This STAT article provides an updated reality check on Amazon’s pharmacy and PBM ambitions.

Key quote: “[I]t remains unclear how Amazon will carve out its corner in an increasingly crowded market.”

I still won’t underestimate Amazon. But for now, it seems content to join the drug channel, not fundamentally change it.