Sometimes, a little knowledge can be a bad thing.

I want to share with you, dear reader, the strange but true tale of my recent foray into the wonderful world of hospital price transparency for routine lab services.

I discovered—with great effort—that the rates my health plan negotiated with the largest local health system in Philadelphia were greater than the self-pay, cash price. Ultimately, my baffling and unexpected out-of-network bill required me to pay more out-of-pocket than the total cash price.

This tale neatly summarizes why so many people hate our healthcare system—and why the average patient will have trouble benefiting from transparency regulations.

Learn more about how hospitals get paid for provider-administered drugs during my upcoming live video webinar, Drug Channels Update: Buy-and-Bill Market Trends, on September 24, 2021, from 12:00 p.m. to 1:30 p.m. ET. CLICK HERE TO LEARN MORE AND SIGN UP.

My Philadelphia-based company purchases pricey Platinum PPO health insurance from Independent Blue Cross (IBC). Penn Medicine, the health system of the University of Pennsylvania, and its physicians are in-network for my IBC plan.

Recently, my physician ordered some standard tests for my annual physical. I used the lab conveniently located two doors down the hall from my physician’s office in the Penn Medicine building.

Three months after my appointment, I received an unexpected bill from Penn Medicine, for $244.93. The bill showed only four figures: I was puzzled. Where did these numbers come from? Why did I owe 46.6% coinsurance on the total payment? Or maybe I owed 3.6% of the total charges?

The answers required a surprising amount of work.

My first call was to IBC. I discovered that Penn Medicine’s outpatient laboratory services are out-of-network. Surprise! I’m on the hook for a 50% coinsurance.

Yet I wasn’t being asked to pay 50% of anything on my bill. Hmm.

Since this is Drug Channels, I dug deeper.

As you may know, CMS’s Hospital Price Transparency rule took effect on January 1, 2021. Hospitals must report previously hidden details about their third-party contracts, along with the cash price for many services. Click here for helpful New York Times advice on finding your own hospital’s figures.

Most hospitals have simply ignored this rule. Fortunately, Penn Medicine is one of the few hospitals that have bothered to comply with this government regulation.

I found Penn Medicine’s data on its Transparency in Pricing web page. Here’s what I did with these data: SHOW ME THE MONEY

I was able to locate the self-pay amount for 15 of the 19 tests that were paid by IBC. Here’s what I found: The table below summarizes my findings: 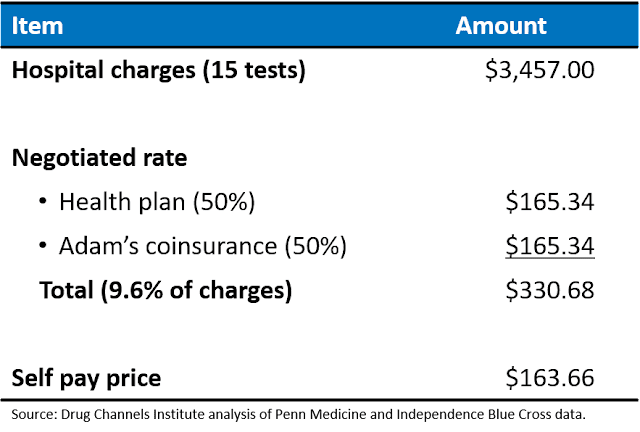 So, what did I learn from all of this fun? Warren Buffet recently observed: “Medical costs are the tapeworm of American economic competitiveness.”

As my experience demonstrates, the tapeworm always wins.