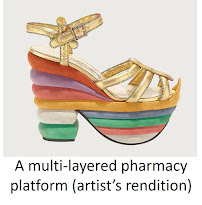 Last week, Cigna released its earnings for the first quarter of 2021. Links below.

I was struck by how quickly Cigna’s Express Scripts PBM business has increased revenues and prescriptions from its retail pharmacy network. Our second chart below highlights this growth.

The businesses in Cigna's Evernorth segment—especially Express Scripts, Ascent Health Services, and InsideRx—are already providing rebate negotiation, network management, and/or a sourcing platform for Prime Therapeutics, Kroger, Humana, GoodRx, and Amazon.
I expect Cigna’s influence over the drug channel to expand further as other businesses step onto this burgeoning platform.

For more on PBMs’ business models and profits, see Chapter 5 and Section 11.2. of DCI’s 2021 Economic Report on U.S. Pharmacies and Pharmacy Benefit Managers.

DISPENSE IT YOURSELF (DIY)

The chart below shows the quarterly revenues and adjusted (30-day equivalent) prescriptions dispensed from Express Scripts’ mail and specialty pharmacies. 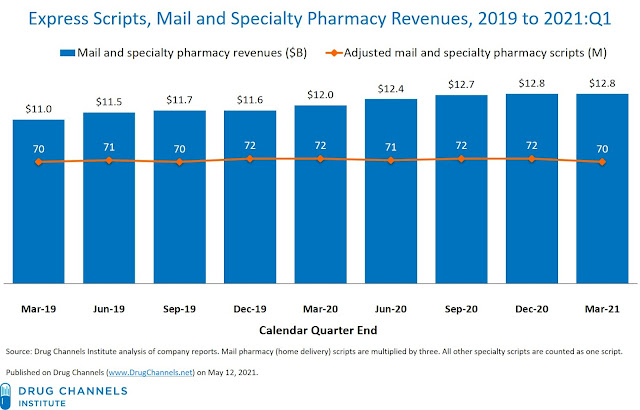 Specialty prescriptions have been driving revenues from pharmacy dispensing. Year-over-year growth in quarterly revenue was 9% to 10% during 2020. Growth slowed to 6% in the first quarter of 2021.

Note that the number of adjusted prescriptions dispensed from Express Scripts’ pharmacies has not significantly changed over the past nine quarters.

DISPENSED FOR YOU (DFU)

The chart below shows the quarterly revenues and adjusted (30-day equivalent) prescriptions from retail network pharmacies. 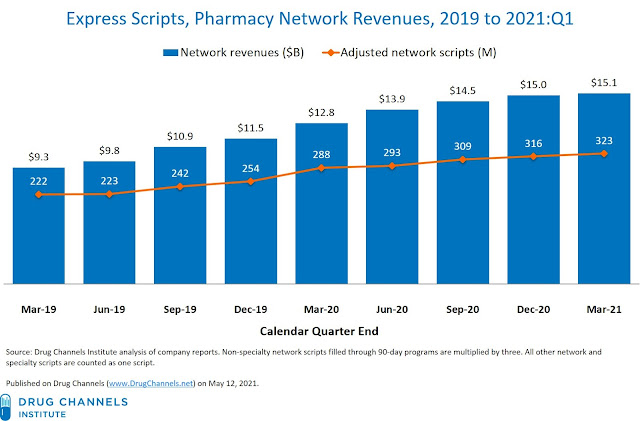 As I see it, the businesses within Evernorth form a negotiation, network management, and sourcing platform that PBMs and other companies can leverage.

Smaller PBMs often lack internal dispensing operations and seem to perform poorly in managing net drug costs. For example, as I noted last June, it appears that Prime was consistently reimbursing retail pharmacies at higher rates than Express Scripts was.

As far as I know, Cigna has never explicitly validated my interpretation of its strategy. However, the evidence points to Cigna’s gaining influence as other external companies join Ascent Health Services (for deeper rebates), Express Scripts’ dispensing pharmacies (for better generic and specialty acquisition costs), and Express Scripts’ network management (for reduced retail reimbursements).