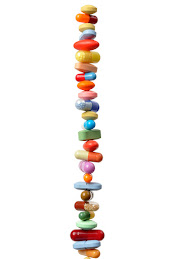 Cigna’s Evernorth business has recently released its 2020 Drug Trend Report. The results, which reflect the Express Scripts PBM business, are presented as a series of animated webpages. As you can see, Chief Innovation Officer Dr. Glen Stettin is newly cartooned.

For commercial plan sponsors, pharmacy benefit spending grew by 4.0%. However: Details and comments about some therapeutic classes below.

SaveonSP, the secretive copay maximizer partner of Express Scripts, apparently again drove big specialty savings for some plans in 2020. I wonder how many plan sponsors have probed the profits and operations of this business?

The chart below tracks trends for Express Script’s commercial clients for the past six years. 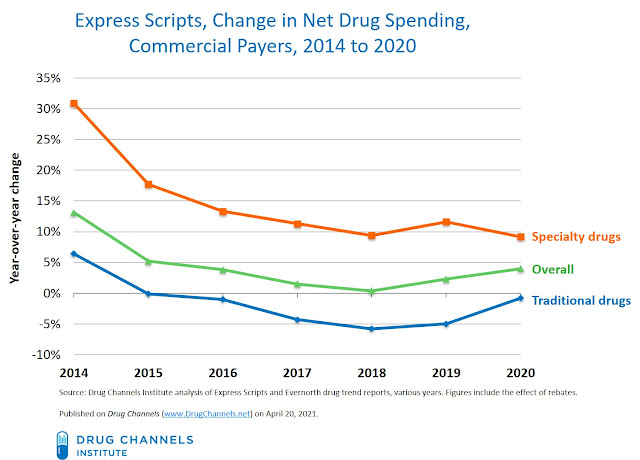 As you can see: For a deep dive into U.S. drug spending data, see Chapter 4 of our new 2021 Economic Report on U.S. Pharmacies and Pharmacy Benefit Managers.

Year-over-year changes in drug spending have two primary components:
The total change in spending equals the sum of changes in unit cost and changes in utilization. Understanding this mix of cost and quantity is crucial to understanding what drives drug spending. Unfortunately, many journalists and politicians conflate “spending” with “prices.”

Cigna provided Drug Channels with the underlying data that deconstructs the change in drug spending into these two primary components. (Evernorth’s online report did not include the aggregate values for these data.)
As you can see below, growth in utilization exceeded growth in costs for both traditional and specialty drugs. These results are consistent with the figures for the past few years. 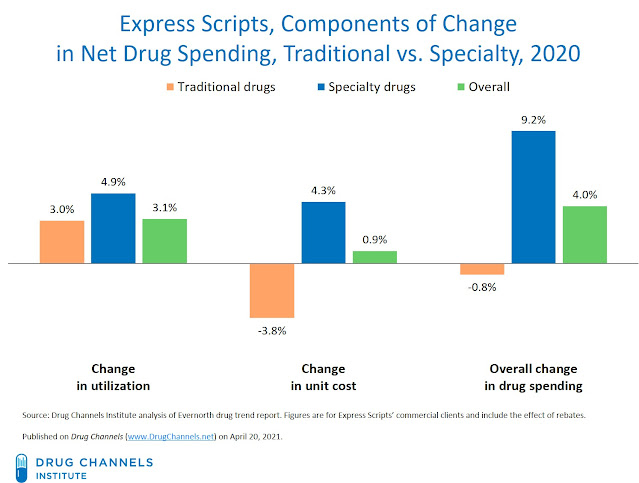 Note that drug costs are reported net of rebates received by plans. They therefore reflect net (not list) prices paid by third-party payers. The cost figures include (1) retail and mail pharmacy dispensing margins, and (2) any PBM retail network spreads.

For 2019, Express Scripts reported that specialty trend was -5.2% for plans in its SaveonSP specialty patient assistance solution vs. +12.3% for nonparticipating plans. Cigna confirmed to me that the roughly 17 percentage point gap remained for 2020, but the company did not provide any specific figures.

As I see it, SaveonSP exploits a loophole in how manufacturers provide funds for patient support. Money designated to support underinsured patients or those with coinsurance is instead diverted to well-funded employer-sponsored plans.

For my research on the secretive SavonSP program and its unusual profit model, see Why Do CVS And Express Scripts Rely on Secretive Private Companies to Run Their Copay Maximizer Programs? For a more comprehensive overview on accumulators and maximizers, see Section 6.2.2. of our 2021 pharmacy/PBM report .

SaveonSP still has an amazingly uninformative, one-page webpage and refuses to publicly address the transparency issues raised on Drug Channels. I wonder why?

NOTE: This post was updated to clarify price changes for non-insulin products.