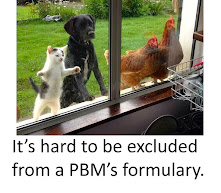 Today, I update our annual tracking of the number of exclusions by each PBM. I also highlight the expansion of exclusions into major specialty therapy classes. The 2021 formulary exclusion lists are available below for your downloading pleasure.
The growth in excluded products shows how competitive many specialty therapy categories have become—and the undisclosed but presumably significant rebates generated by these products. Patient impact is also increasing, as products move on and off formularies.

Eight years ago, I outlined the inevitability of formulary exclusions. But I didn’t anticipate just how far PBMs would push this tool. Expect much more controversy as exclusions hit previously untouched but sensitive sole-source products in oncology, rheumatology, and beyond—and even start moving into Medicaid.

Formulary exclusions have emerged as a powerful tool for PBMs to gain additional negotiating leverage against manufacturers. The prospect of exclusion leads manufacturers to offer deeper rebates to avoid being cut from the formulary. Exclusions are a key factor behind the growing gap between list and net prices for brand-name drugs. (See Surprise! Brand-Name Drug Prices Fell (Again) in 2020.)

Formulary exclusions block access to specific products on a PBM’s recommended national formulary. These are suggestions, not mandates. Thus, a drug’s appearance on an exclusion list does not guarantee that all patients will lose access. Plan sponsors—the PBM's clients—can choose not to adopt their PBM’s standard formulary. However, they would then face reduced rebates and/or higher plan costs.

Here are the 2021 formulary updates for commercial clients of the three largest PBMS: I also recommend Xcenda’s Skyrocketing Growth in PBM Formulary Exclusions Raises Concerns About Patient Access . This excellent report provides a valuable analysis of the 2014 to 2020 formulary exclusion lists.

The practice of formulary exclusion began in 2014. Since then, the number of products excluded from the national preferred formularies of the three largest PBMs has grown dramatically. The chart below tracks the growth at each company. 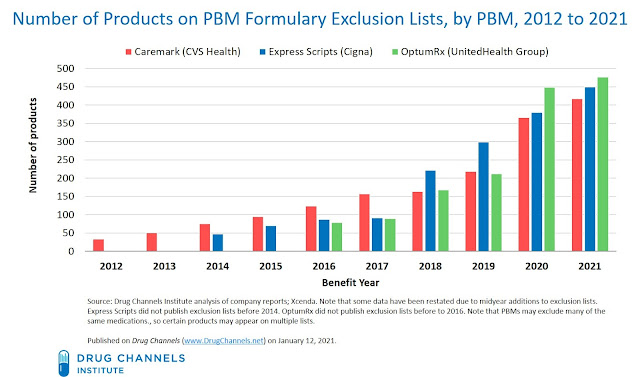 Notable changes since our previous analysis: Note that PBMs may exclude many of the same medications. For instance, the largest three PBMs collectively excluded about 1,200 products in 2020, though there were fewer than 850 unique products excluded. In 2020, 201 medicines were excluded from two PBMs’ formularies, and 74 were excluded from all three formularies.

Many exclusions target traditional, non-specialty treatments for chronic diseases. Drugs targeted for formulary exclusion typically fall into one or more of the following categories: These criteria led many single-source, brand-name drugs—those without a generic equivalent or biosimilar alternative—were excluded from PBM formularies. Xcenda found that from 2014 to 2020, a total of 943 unique medications faced exclusion for at least one year from one PBM. Of this total, 389 (41%) were single-source, brand-name drugs.

Over the past few years, formulary exclusions have also been extended to specialty drug categories, though PBMs do not have a uniform approach to these products. Consider the three specialty classes that represent a significant share of payers’ spending:
PATIENTS GET BOUNCED

Exclusions affect a patient’s out-of-pocket costs and access to a particular therapy. They raise the prospect of non-medical switching—altering a patient’s drug therapy for reasons other than a drug’s efficacy, side effects, or clinical outcome.

These figures may seem low, but they are more significant than they may appear. For instance, inflammatory conditions accounted for only 0.75% of Express Scripts’ commercial claims in 2019. How many of those patients will be affected by a switch from Cosentyx, which was preferred in 2020, to Taltz, which will be a preferred option in 2021? What will happen to patients if the formulary status of these products switches back again?

That’s why PBMs should provide more transparency into how patients taking drugs for cancer and for other specialty therapies are affected by formulary changes.

The ever-growing presence of exclusions—and differences between PBMs’ lists—raises important issues about patient care. Individual patients’ access to a particular therapy is determined by their plan’s PBM. Patients who change plans (or employers) can unknowingly lose access to their physician’s preferred therapy—unless they and their doctors can scale the paperwork mountain.

One final item: Exclusion is now moving into the previously untouchable Medicaid program. Last week, CMS announced that under a section 1115 demonstration, Tennessee will be able to implement a “commercial-style” closed drug formulary that does not cover certain drugs. This is the first time that a state has been permitted to exclude products from its Medicaid formulary without losing Medicaid rebates. As expected, 21 patient and consumer groups strongly oppose this move.

I suspect that the Biden administration will rescind permission for the Tennessee demonstration. But it's an important precedent. Looking ahead, there’s no doubt that more drugs will find themselves on the outside looking in.