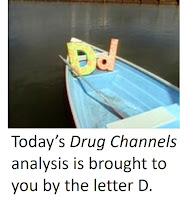 The Centers for Medicare & Medicaid Services (CMS) has recently released its 2021 data on enrollment in Medicare Part D prescription drug plans (PDPs). Our exclusive analysis of these numbers finds that for 2021, an astounding 99% of seniors are enrolled in PDPs with preferred pharmacy networks.

Below, we use the new enrollment data to examine the major pharmacy chains’ position within the 27 major Part D plans that have preferred networks. As you will see, the big supermarket chains—Albertsons, Kroger, and Publix—outpaced the big three drugstore chains and Walmart.

Pharmacies continue to sacrifice margin for store traffic. Don’t expect that to change—especially given the notable failure of the independents-only Indy Health Part D plan.

D IS FOR DATA

Last fall, we published the following three-part series on the 2021 Medicare Part D market: For a deep dive into the economics and strategies of narrow network models, see Chapter 7 of our forthcoming 2021 Economic Report on U.S. Pharmacies and Pharmacy Benefit Managers.

For 2021, we have examined the 27 Part D plans offered by nine major companies. There are 26 major multi-regional Part D plans with preferred cost sharing pharmacy networks and 1 smaller plan (Elixir RxSecure). These companies operate 888 regional PDPs, which amounts to 92% of total regional PDPs. For each plan, we identified the preferred status of seven large retail chains.

For the plans with preferred pharmacy networks, we also identified the preferred status of the largest seven retail chains. The open enrollment period for 2021 ran from October 15, 2020, to December 7, 2020. We used these data on enrollment: Medicare Advantage/Part D Contract and Enrollment Data. The figures include enrollment as of the February 1, 2021 payment, so they reflect 2021 trends. For each plan, we summed the total February enrollment.

Note that we examined stand-alone PDPs. A smaller share of Medicare Advantage Prescription Drug (MA-PD) plans have preferred networks. MA-PD plans account for a growing share of enrollment, so we intend to include these plans in future analyses.

P IS FOR PREFERRED 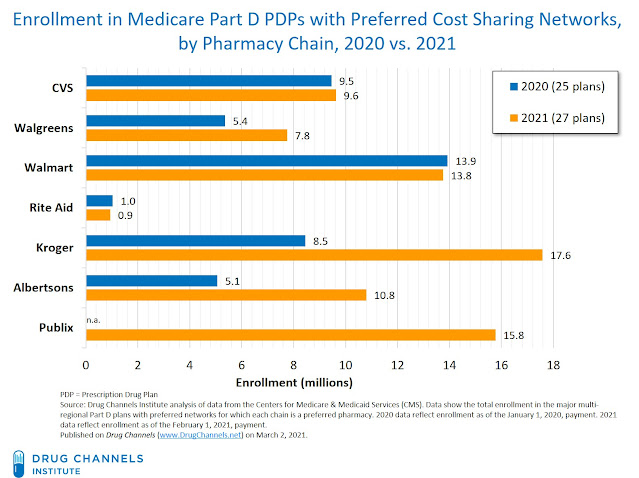 Here are the key trends for the largest retail chains: Note that preferred networks are irrelevant to seniors who qualify for the Low-Income Subsidy (LIS), which provides assistance to Medicare Part D beneficiaries for their drug costs and insurance premiums. In 2020, an estimated 13 million people (28% of all Part D enrollees) received the LIS. Out-of-pocket costs are no more than $3.70 for each generic and $9.20 for each brand-name covered drug in 2021.

E IS FOR ECONOMICS

Chain pharmacies are trying to remain competitive and attract consumers in a saturated retail dispensing market. Pharmacies therefore have incentives to reduce their margins in exchange for growing (or even maintaining) market share. A pharmacy’s cost structure encourages such competition for network position. (See my discussion of pharmacy prescription profits in Section 11.2.1. of my forthcoming report.) Consequently, the reduction in pharmacy profits—via lower reimbursement from plans and/or higher direct and indirect remuneration (DIR) payments by pharmacies—remains the primary source of cost savings from narrow networks.

Pharmacy owners should be realistic about overturning this system. Consider the sad fate of Indy Health Insurance Company, the new Part D plan sponsor that launched for 2021. As I noted in October, an unknown number of pharmacy owners funded Indy Health. It offers two plans (EliteRx and SaverRx), but only in five states. Both chains and independents are in-network, though only independent pharmacies are preferred.

Alas, Indy Health enrolled only about 37,000 seniors in its two plans. That’s about 0.2% of seniors. Despite glimmers of good news and the benefits from vaccination, I suspect that this year will not prove to be delightful for pharmacy economics.


CORRECTION: An earlier version of this article incorrectly stated that Walmart is the only national chain in the Humana Walmart Value Rx Plan. As we noted in October, Kroger and Publix have been added as preferred pharmacies for 2021.
Adam J. Fein, Ph.D. on Tuesday, March 02, 2021