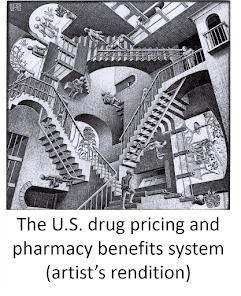 When Americans complain about “drug prices,” most are actually complaining about the share of costs they pay—and how those costs are computed. Addressing patient affordability issues therefore requires a deep understanding of the U.S. drug channel.

Today, I review four crucial issues that the new Congress could tackle to address affordability, patients' out-of-pocket obligations, and prescription prices. I also highlight some of the existing and proposed legislative efforts.
Our complex channel cannot be fixed with simplistic solutions. It may seem unlikely that we will get bipartisan legislation that sensibly addresses the distortions and challenges in our drug pricing system. But I can dream, can’t I?

To appreciate the issues, consider the distribution of patients’ out-of-pocket spending. The chart below shows actual annual costs for patients who filled at least one prescription in 2019. Some observations:
[Click to Enlarge] 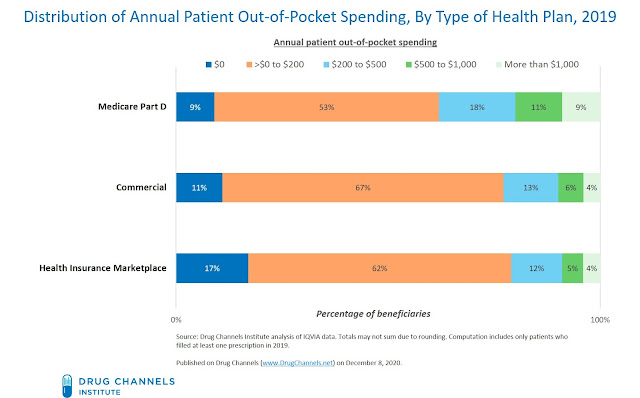 You will also find it helpful to review the charts in Employer Pharmacy Benefits in 2020: Some Good Coinsurance News, But Many Still Face Prescription List Prices and the material in Chapter 6 of our 2020 Economic Report on U.S. Pharmacies and Pharmacy Benefit Managers.

Here are four consequences of today’s pharmacy benefit designs that politicians should acknowledge and try to tackle:

The proliferation of benefit designs with four or more tiers has made out-of-pocket expenses especially significant for specialty drugs. Plans place therapies for such chronic, complex illnesses as cancer, rheumatoid arthritis, multiple sclerosis, and HIV on specialty tiers. More than half of covered workers face coinsurance of 25% or more for the drugs on specialty tiers.

This means that patients typically pay a greater share of the net price than might be apparent from the coinsurance percentage. See the follow-the-dollar prescription math in How Health Plans Profit—and Patients Lose—From Highly-Rebated Brand-Name Drugs.

Major brand-name drugmakers sell their products at half of the list prices, per Five Top Drugmakers Reveal List vs. Net Price Gaps (Plus: The Trouble With Insulin Prices). Many specialty drugs now have meaningful rebates, so this overcharging is particularly troubling.

Seniors’ progression through the Medicare Part D benefit tiers is based on the prescription price negotiated between the plan and the pharmacy. That negotiated price excludes rebates, so beneficiaries reach catastrophic coverage—and its unbounded 5% out-of-pocket expense—sooner when using products with higher list prices.

Payers and PBMs therefore have incentives to select higher-priced, heavily rebated drugs instead of lower-cost alternatives. That’s one reason Part D plans often require enrollees to use products with higher list prices instead of equivalent drugs with lower list prices. (See Why Part D Plans Prefer High List Price Drugs That Raise Costs for Seniors.) Manufacturers are not permitted to provide copayment support to beneficiaries of federal healthcare programs, so the burden of using a higher-price product is borne entirely by the patient.

I highlighted this issue and the associated challenges of rebate reform in The Gross-to-Net Bubble Hit $175 Billion in 2019: Why Patients Need Rebate Reform. I also recommend MedPAC’s 2020 suggestions for restructuring Medicare Part D for the era of specialty drugs, which highlights how plans’ risk has plummeted.

Addressing Part D could be one area of rare bipartisan agreement. The two competing legislative proposals from 2019—H.R.3. (which passed in the House) and S.2543 (which went nowhere)—both included fixes to Part D.

Copay accumulator adjustment excludes the value of a pharmaceutical manufacturer’s copay support program from a patient’s annual deductible and out-of-pocket maximum obligations. Patients on specialty drugs lose big from accumulators, while plans profit from the lower spending that results.

In May, the Centers for Medicare and Medicaid Services (CMS) released a final rule that gives insurers the option to use copay accumulator adjustment for their pharmacy benefit programs. Plans are aggressively adopting accumulators—and generating significant pushback. See Copay Accumulator and Maximizer Update: Adoption Accelerating As Pushback Grows. I also encourage you to read Anndi McAfee’s SaveonSP's Copay Maximizer Failed Me: A Patient's Perspective .

We don’t yet know the Biden administration’s position on these new benefit design options. However, the American Medical Association recently adopted Resolution 212, which supports federal and state laws that ban copay accumulators. You should also keep an eye on H.R. 7647 (The Preserving Patient Savings on Drug Costs Act), a House bill that blocks the CMS final rule on copay accumulator adjustment.

I estimate that 10% to 15% of all specialty prescriptions are dispensed under the 340B Drug Pricing Program. Whenever a prescription is eligible for deeply discounted 340B pricing, an insured patient could pay thousands of dollars out of pocket—even as the 340B hospital and its contract pharmacy generate substantial profits. See the follow-the-dollar prescription math in How Hospitals and PBMs Profit—and Patients Lose—From 340B Contract Pharmacies.

Consequently, 340B hospitals require people with insurance and their health plans to overpay for their prescriptions—i.e. keep prescription prices high—at contract pharmacies so the covered entity can generate 340B funds.

You can read more in What I told Congress about the 340B Program. A complete 340B overhaul probably won’t happen, but legislative action is urgently required to sort out the contract pharmacy mess.

H.L. Mencken once said: “There is always a well-known solution to every human problem—neat, plausible, and wrong.”
The canards of “importation,” “direct negotiations,” and "international benchmarking" fall squarely into the category of simple solutions that won’t address the four challenges above. That's why politicians should get serious about addressing the structure of commercial and Medicare Part D benefit designs.

I’ll leave the last word to Steve Collis, president and CEO of AmerisourceBergen. In If We Care About Patients, It’s Time to Focus on Benefit Design, he wrote:

“Those who face the greatest burden from these cost pressures in our system are the most vulnerable Americans: those with very serious or chronic conditions and often those with the least-generous insurance. Compounding this inequity are the disparities patients face between different types of treatment – if you need medicine to manage your illness, the current system often works against you …

The devastation caused by poor benefit design is a slower-moving train than COVID-19, but it’s just as deadly in the long run. We need to stop with the rhetoric and start having a serious discussion about how to fix what’s broken and make insurance work for all of us to improve overall health outcomes.”