This week, I’m rerunning some popular posts while I prepare for this Friday’s video webinar: Drug Channels Outlook 2021. 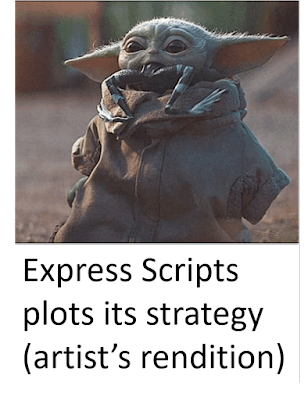 Last week, news broke that Prime Therapeutics is expanding its relationship with Cigna’s Express Scripts to include mail and specialty pharmacy dispensing. So far, there's been very little written about this transaction.

Below, I share my thoughts on the following topics arising from the deal: Prime is becoming increasingly dependent on outsourcing to Cigna’s Express Scripts business. This new pharmacy contract furthers the industry’s move toward vertical consolidation and the disappearance of the independent PBM industry.
Once again, channel intermediaries continue to gain power and extract profits. More to come.

In late 2019, Prime announced a major restructuring of its business via a novel partnership with Express Scripts. I analyzed this transaction in this pre-pandemic article: Express Scripts + Prime Therapeutics: Our Four Takeaways From This Market Changing Deal.

A Prime spokesperson confirmed the relationship to me in an on-the-record email to me, writing:

Here are four observations and takeaways from this new arrangement:

1. Express Scripts will extend its dominance over specialty and mail dispensing.


Cigna, through its Express Scripts business, is now the third-largest pharmacy in the United States. This ranking is based on prescription dispensing revenues from traditional and specialty drugs. See The Top 15 U.S. Pharmacies of 2019: Specialty Drugs Drive the Industry’s Evolution.

The pharmacy business has become crucial for PBMs. For 2019, we estimate that PBMs earned more than half of their gross profits from mail and specialty pharmacy dispensing activities. (See Section 11.2.3. of our 2020 Economic Report on U.S. Pharmacies and Pharmacy Benefit Managers.)

Prime operates as a pass-through PBM for the 18 Blue Cross and Blue Shield health plans that have ownership stakes in the business. Prime also provides PBM services for five additional plans and direct employer groups. It handles benefits for more than 30 million people. This means that a substantial amount of mail and specialty business could shift to Express Scripts.
Here's my updated illustration of the major vertical business relationships among the largest companies:
[Click to Enlarge] 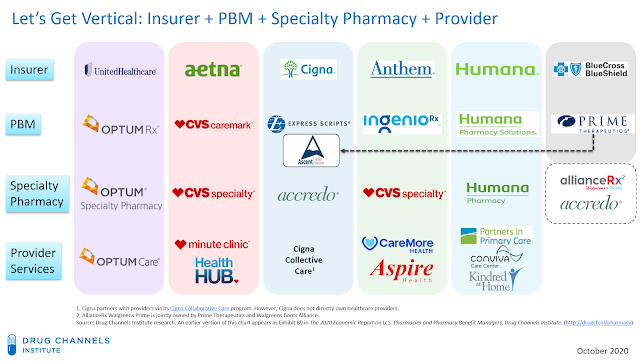 As a reminder, WBA and Prime Therapeutics announced AllianceRx Walgreens Prime in mid-2016. This joint venture became the exclusive mail and specialty pharmacy for Prime Therapeutics’ PBM beneficiaries, though it is also contracts with (and dispenses for) other PBMs and plans. The Prime/Walgreens relationship is scheduled to run until 2026. (In case you’re wondering, I’ve been sternly warned not to use the acronym “AWP” when describing this business.)

Legally, the business is a subsidiary of WBA, so its financials are included within WBA’s broader financial reporting. WBA does not report separate revenues for the business, so the revenue figure in our list of the largest 15 specialty pharmacies reflects Drug Channels institute estimates. (See The Top 15 Specialty Pharmacies of 2019: PBMs Stay On Top.)

In my January article, I wrote skeptically about the Prime-Walgreens relationship:

It’s not clear that the Prime deal has ever lived up to its promise for Walgreens. Prime Therapeutics has grown more slowly than its larger peers, which has meant less incremental growth for Walgreens. In addition, I perceive that Prime’s Blue Cross and Blue Shield clients have been less aggressive in using limited and exclusive pharmacy networks for specialty drugs.

At the Nephron event, Prime reportedly revealed that at least three of Prime’s health plan clients will transition away from AllianceRx Walgreens Prime to Express Scripts as of January 1, 2021. I suspect that other plans will follow, especially if Express Scripts offer aggressive pricing to win the business.
As volume leaks away from AllianceRx Walgreen Prime, it will lose scale from an already-weakened business. A rush for the exits could then precipitate a wind down of the Walgreens-Prime partnership before 2026.

Recall that the cost savings and efficiencies of AllianceRx Walgreens Prime allowed Prime to be selected over CVS Health to manage the specialty pharmacy benefit for the Federal Employee Program (FEP). The three-year FEP agreement, which became effective in January 2018, includes 5.4 million federal employees, retirees, and their families. Express Scripts will benefit if Prime retains the business.

In January, Alex Gourlay, who was then Walgreens president, was "very confident that [Walgreens] will benefit from that [Prime] relationship in the future." I doubt they feel that way now. Alas, WBA’s management will probably dodge any tough questions about these latest developments during today’s earnings call.
3. Express Scripts is building a novel GPO and pharmacy platform.


In my opinion, Express Scripts is building its own in-house negotiation and sourcing platform that other PBMs can leverage. Express Scripts seeks more scale in order to extract greater rebates from brand-name manufacturers and deeper purchasing discounts from generic manufacturers.

In the future, other smaller PBM competitors may join Ascent (for rebates) and Express Scripts’ pharmacies (for generic and specialty purchasing). Some of these PBMs lack internal dispensing operations and have performed poorly in managing net drug costs. (See my updated analysis of Prime and MedImpact vs. CVS and Express Scripts.)
4. The FTC is still unlikely to intervene.


The Federal Trade Commission (FTC) probably considers the newest Express Scripts-Prime arrangement to be pro-competitive.
I explained my rationale in point #4 of Express Scripts + Prime Therapeutics: Our Four Takeaways From This Market Changing Deal. I won’t repeat my arguments here, so I encourage you to review my January post.
LOOKING AHEAD

Prime’s current management team is working rapidly to undo the strategy of the previous team. Rather than trying to build out its own PBM capabilities, the company is becoming increasingly dependent on outsourcing to Cigna’s Express Scripts business.

As I speculated in January, Prime’s multiple deals with Express Scripts preserves the company’s options and flexibility. However, they also create a logical pathway for Prime to be acquired by or absorbed into Cigna. The PBM endgame rolls on.