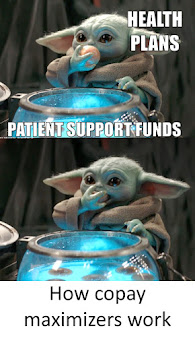 Almost three years ago, I warned about the emerging trend of copay accumulators and outlined the costly consequences for patients.

I’m sad to report that the latest data show a startling acceleration in the adoption of copay accumulator adjustment and the closely related copay maximizer.
Within the next year, more than 80% of commercially insured beneficiaries will be in plans with these benefit designs—although not all plan sponsors will have fully implemented them.

Accumulators, maximizers, and copay support programs are inefficient solutions to flaws in the U.S. drug channel system. That’s why patient groups and provider organizations are pushing back against them.
Alas, our divided Congress seems unlikely to provide any relief. Read on for the full details.
COPAY TO THE MAX

Pharmaceutical manufacturers offer copayment offset programs (also called copay cards or coupons), which cover a portion of a beneficiary’s out-of-pocket costs for a brand-name drug. These programs support beneficiaries with commercial insurance, but they cannot be used by enrollees in government programs such as Medicare Part D.

A few years ago, plan sponsors began adopting benefit designs that exclude the value of a manufacturer’s payments from the patient’s deductible and out-of-pocket maximum obligations. There are two general models:
For background, I suggest our two most recent articles about accumulators and maximizers:
MAXIMUM ACCELERATION

The chart below illustrates the acceleration in plan designs with accumulators and maximizers. The data come from MMIT’s 2020 survey of 50 managed care plans with 127.5 million covered lives. Click here to contact MMIT if you would like to purchase the full report. We relied on MMIT’s data for our 2018 analysis . (The company was then known as Zitter Health Insights.) 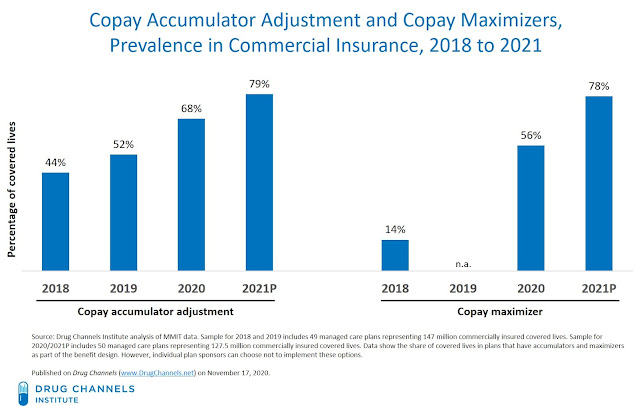 An important caveat: These figures show the share of covered lives in plans that have accumulators and maximizers as part of the benefit design. However, individual plan sponsors can choose not to implement them, so the actual share of lives could be lower than the figures shown above.

Most of the drugs subject to accumulators are single-source therapies with no equivalent generic version or therapeutic alternative. Patients don’t decide to forgo cancer or HIV treatment because they now have a “consumer-oriented” incentive. More likely, they will just stop filling their specialty drug prescriptions. Maximizer programs solve this adherence challenge, but they can have ruinous copay obligations for the patient.

Consequently, patient groups and provider organizations have started lobbying against accumulators and maximizers. So far, four states—Arizona, Illinois, Virginia, and West Virginia—have passed laws that ban or restrict the use of accumulators in individual and small group healthcare plans. However, states do not have the authority to ban accumulators in self-insured plans, which account for the majority of commercial insurance.

Recent actions suggest that the debate is intensifying: As I warned in 2018, this entire situation combines many of the worst aspects of our crazy drug channel system: Sadly, these unhealthy dynamics often shortchange patients with serious medical conditions and add troubling complexity to the U.S. drug channel.