Improve Compliance and Create Transparency with 340B Rebates (Free webinar) 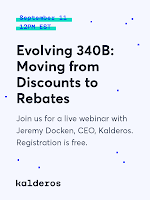 As regular readers know, I believe the 340B Drug Pricing Program needs to evolve into a more transparent, properly regulated program.

That’s why I’m especially glad to share today’s guest post from Jeremy Docken, Founder and CEO at Kalderos. Jeremy explains the 340B program's use of rebates instead of the more common upfront discounts. He argues that greater adoption of the established 340B rebate process will benefit all stakeholders: covered entities, manufacturers, state Medicaid programs, and others.

To help the industry learn more about 340B rebates, Kalderos is sponsoring a live video webinar: Evolving 340B: Moving from Discounts to Rebates.

I’ll be joining Jeremy during this webinar for an interactive presentation, discussion, and Q&A. This webinar will take place on September 11, 2020 (12:00 p.m. to 1:00 p.m. ET). Registration is free and open to all.

Read on for Jeremy’s insights—and be sure to join us in three weeks!

Improve Compliance and Create Transparency with 340B Rebates
By Jeremy Docken, Founder and CEO, Kalderos 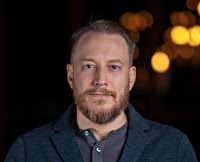 Duplicate discounts remain a significant problem for the 340B Drug Pricing Program. Reports from the Office of Inspector General (OIG) and the U.S. Government Accountability Office (GAO) have highlighted the problems.

However, there is a simple solution that can eliminate duplicate discounts: Convert 340B purchase discounts to rebates. In this article, I explain how and why 340B rebates will be a productive evolution for our industry.

The 340B statute prohibits manufacturers from having to provide a discounted 340B price and a Medicaid drug rebate for the same drug. The prohibition on duplicate discounts applies to traditional Medicaid arrangements as well as Medicaid programs operated by managed care organizations, also known as Managed Medicaid.

In our work with covered entities, we’ve identified three primary reasons why duplicate discounts persist:
These problems all relate to data transparency. Pharmacy management software that all covered entities are required to maintain holds the key for ensuring that all 340B stakeholders can work together to improve program integrity. It is time for those data to be shared within the drug channel.

THE 340B REBATE SOLUTION

When the 340B program was created in 1992, covered entities only obtained the benefit of the program via an invoice discount effectuated through a wholesaler. That’s still the most common way for 340B covered entities to access discounted pricing. Manufacturers and wholesalers have chargeback procedures to process these discounts.

However, there is a better way.

Today, there is one scenario that does not result in duplicate discounts: those 340B drugs dispensed by AIDS Drug Assistance Programs (ADAPs). And that’s because ADAPs receive 340B pricing in the form of a rebate.

In 1994, HRSA issued a final notice that recognized a rebate option for ADAPs that wanted to participate in the 340B program. This rebate option has eliminated duplicate discounts involving ADAPs.

The process is highly transparent to all stakeholders. ADAPs provide claims data for all transactions that the ADAP considers to be 340B eligible. These data are provided to both the state Medicaid agency and the drug manufacturer.

The Medicaid agency can then match the claims data provided by the ADAP and identify instances where both parties—the 340B covered entity and the Medicaid agency—have asked for a 340B discount from the manufacturer for the same prescription. This simple matching process can allow Medicaid to avoid causing a duplicate discount.

This system relies on collaboration and data transparency. A common model allows covered entities, Medicaid agencies, and manufacturers to use 340B rebates and avoid the problems associated with chargeback discounts.

At Kalderos, we believe it’s time to make 340B rebates available to everyone.

A 340B rebate will solve the duplicate discount problem, while providing benefits to all stakeholders:
Most importantly, a rebate option allows manufacturers and covered entities to work more closely with one another in a transparent manner.

For example, a manufacturer can identify data irregularities and directly ask the covered entity to clarify the transactions. This will reduce the number of audits. Similarly, covered entities will have the data to investigate incorrect discounts and underpayments directly with manufacturers. This will be much faster and more efficient than asking HRSA to get involved.

340B rebates have been in place for more than 25 years. It’s time to embrace this straightforward model to modernize the 340B program and allow it to grow in a compliant and efficient manner.

To learn about how Kalderos is bringing 340B rebates to the industry using innovative platforms and technology, join me and Dr. Adam Fein on September 11 for a free video webinar: Evolving 340B: Moving from Discounts to Rebates. I’ll explain how our system works and why more than 3,000 covered entities have already embraced our technology. We'll also take your questions live. See you in three weeks!