How GoodRx Profits from Our Broken Pharmacy Pricing System 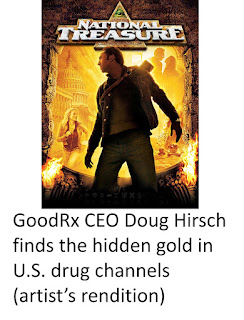 On Friday, GoodRx filed its Form S-1 in preparation for going public. Link below.

The company is insanely profitable. Its adjusted net income—earnings before interest, taxes, depreciation, and amortization (EBITDA)—is an astonishing 40%.

Below, I provide my overview of how our crazy drug channel system enables GoodRx’s good fortune. You will admire the GoodRx management team’s business savvy in building a company that lowers out-of-pocket costs for consumers. But you will also wonder whether this business perpetuates a broken pharmacy drug pricing model.

P.S. This article updates and expands on the comments I posted to @DrugChannels on Friday evening.

GoodRx’s 262-page S-1 filing contains a lot of details about its business. As always, I encourage you to review the original source material for yourself. Click here to read the complete filing.

For additional industry context, see Sections 4.3. and 5.3. of our 2020 Economic Report on U.S. Pharmacies and Pharmacy Benefit Managers.

Here’s my summary of the GoodRx revenue recipe:

The U&C cash price for prescriptions varies greatly among pharmacies, especially for generic drugs:
Prescription list prices are generally far above a pharmacy’s actual net acquisition cost. That’s because a pharmacy benefit manager (PBM) will not reimburse a pharmacy above the pharmacy's U&C list price. Consequently, pharmacies typically establish U&C prices that exceed the maximum expected reimbursement from any payer. The pharmacy eliminates the risk that it could be reimbursed an amount less than what a third-party payer would have been willing to pay.

As you’ll see, this is a deep irony embedded within the GoodRx business model.

2. Save money for consumers by providing easy access to a PBM’s network rates.


A PBM establishes a network of pharmacies that allows consumers with prescription drug insurance to readily fill their prescriptions. Network pharmacies accept discounted pricing in exchange for access to a plan’s members. A PBM’s network rates are generally far below the pharmacy’s U&C list price, especially for generic drugs. PBMs typically require pharmacies to accept discount cards to remain in the PBM's pharmacy network.

That’s why a consumer without insurance saves money by having access to a PBM’s network rate, which is lower than the cash price. GoodRx provides a convenient and user-friendly interface for finding these PBM rates. Essentially, GoodRx is a PBM-backed program that passes a portion of rebates and network discounts off list directly to patients at the point of sale.

For a patient with insurance, benefit design and network rates can differ among PBMs. This difference creates an unusual arbitrage opportunity that lets the patient reduce out-of-pocket expenses by accessing the rates of another PBM.

This is why GoodRx defines its program’s “savings” as “the difference between the list price for a particular prescription at a particular pharmacy and the price paid by the GoodRx consumer for that prescription utilizing a GoodRx code available through our platform at that same pharmacy.” (emphasis added)

Patients would save even more if pharmacies set their U&C cash prices more reasonably. But most pharmacies won't do so, because of their PBM contracts. Cash-pay generic programs are a minor exception.

3. Collect a portion of the fee that the pharmacy pays the PBM.


The prescriptions available via GoodRx are not considered cash-pay, because the claims are adjudicated by a PBM. The PBM collects a per-prescription fee from the pharmacy whenever a consumer uses a discount program at a pharmacy. The PBM shares a portion of this fee with GoodRx, which directed the patient to the pharmacy.

GoodRx earns either a percentage of the pharmacy’s fee or a fixed fee per prescription. Here’s an excerpt from page 89 of the S-1:

PROFITING FROM A CRAZY SYSTEM

The GoodRx team has built and scaled a robust platform for monetizing the three steps above.

Here’s their reward: In 2019, GoodRx collected an astounding $364 million in fees on $2.5 billion in consumer Rx spending.

In other words, GoodRx earned about 15% of the $2.5 billion that consumers spent at pharmacies with its programs.

Note that we don’t know the undiscounted cost of these prescriptions. Nor do we know how much PBMs earned—but we can assume it was more than they paid GoodRx.

Sales and marketing are GoodRx’s biggest expenses, and they absorb almost 50% of revenues. After other expenses, the company’s pre-tax profit margins are 40%. (See page 85 of the S-1.) Again, incredible.

It’s no surprise that pharmacies despise this model. Pharmacies lose in two ways. One, they lose the potential revenue from a cash-paying customer, who would have paid more than what the pharmacy received from a PBM. Two, the pharmacies must pay a fee for the privilege of dispensing to a patient who may have used their pharmacy anyway. However, pharmacies are effectively prevented from offering low cash prices, because they risk undercutting their third-party margins.

If Amazon were a true disrupter, it would focus on selling low-cost generics at cost-plus pricing. if other pharmacies followed, then GoodRx would cease to exist. But we’ve seen that Amazon can’t or won’t commit to changing the pharmacy channel. (PillPack doesn't count, because it has done nothing to disrupt pricing.)

The lack of credible disruption is more good news for GoodRx—and perhaps even better than finding a treasure map on the back of the U.S. Constitution.