Walgreens and CVS Top the 28,000 Pharmacies Profiting from the 340B Program. Will the Unregulated Party End? 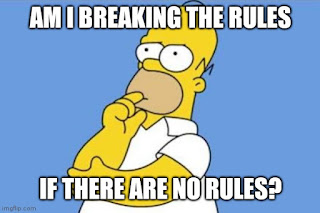 It’s time for our annual look at the 340B Drug Pricing Program’s booming pharmacy component.

Our exclusive analysis of government data finds that 28,000 pharmacy locations—almost half of the U.S. industry—now act as contract pharmacies for the hospitals and other healthcare providers that participate in the 340B program. Over the past 12 months, the number of pharmacies in the program has grown by more than 3,300 locations.

As you will see below, multi-billion-dollar, for-profit, publicly traded pharmacy chains—Walgreens, CVS, Walmart, Rite Aid, Kroger, and Albertsons—continue their unchecked 340B expansion.

Despite this astonishing growth, the contract pharmacy component does not have—and has never had—a regulatory infrastructure. That’s because the subregulatory notice that created contract pharmacies wasn’t subject to any rulemaking procedures. Eli Lilly recently challenged this notice, which forced the government to concede that its own pharmacy guidance is “not legally enforceable.”

As you review our analysis, ponder why manufacturers still comply with HRSA’s non-binding guidance—and why investors remain unconcerned with the risks of public companies’ participation in the out-of-control 340B program.

The 340B program mandates that pharmaceutical manufacturers provide outpatient drugs to certain healthcare entities—known as eligible covered entities—at significant discounts. The Health Resources and Services Administration (HRSA), an agency of the U.S. Department of Health and Human Services, oversees the program through its Office of Pharmacy Affairs (OPA).

A covered entity can purchase and dispense 340B drugs through internal or external (contract) pharmacies. In 2010, HRSA decided that eligible entities (including those that have an in-house pharmacy) could access 340B pricing through an unlimited number of contract pharmacies. There was no rulemaking or public comment on the agency’s unilateral decision. As far as I know, there is no evidence that HRSA contemplated the predictable explosion in contract pharmacy arrangements.

Pharmacies profit by trading their third-party prescription margins for a share of the 340B discounts earned by covered entities. These profits can come at the expense of low-income, uninsured patients, per GAO Confirms It: 340B Hospitals and Contract Pharmacies Profit from Low-Income, Uninsured Patients. A huge ecosystem of technology vendors and consultants enables the extraction and sharing of 340B discounts.

The contract pharmacy process is complex and confusing. For more details, see Section 11.5 of our 2020 Economic Report on U.S. Pharmacies and Pharmacy Benefit Managers.

In profiling the 340B contract pharmacy market, Drug Channels Institute examined HRSA’s Contract Pharmacy Daily Report, as published on July 1, 2020. We screened out all contracts that had been terminated before that date. Using our proprietary database, we classified all contract pharmacy locations by parent organization. Most chains and many PBM-owned pharmacies are listed with multiple alternate names.

Since HRSA’s 2010 change in guidance, the number of pharmacies in the 340B program has skyrocketed:
Four large retail chains account for about 6 out of 10 of the program’s contract pharmacy locations. These companies are among the largest U.S. pharmacies. 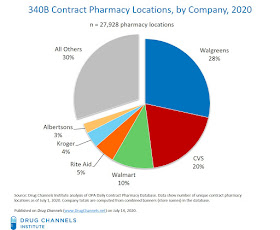 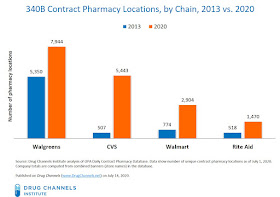 In upcoming articles, I’ll examine pharmacy benefit manager (PBM) and specialty pharmacy participation in 340B. I’ll also delve into how hospitals are using their in-house specialty pharmacies to increase 340B profits.

The 340B program's sales have grown to become almost as large as the Medicaid program’s outpatient drug sales. According to data provided to Drug Channels by HRSA, purchases under the 340B program have tripled since 2014. Details here: New HRSA Data: 340B Program Reached $29.9 Billion in 2019; Now Over 8% of Drug Sales.

However, 340B lacks Medicaid’s regulatory infrastructure and controls. There’s no requirement that the discounts provided under the 340B program be utilized appropriately, no fair market value standards for pharmacies’ fees, no limit to the size of a contract pharmacy network, and zero transparency into the profits earned by billion-dollar, public companies.

That’s right. HRSA hasn’t bothered to issue guidance or notices on these and other crucial topics. Its inaction has enabled profiteering by public pharmacy and PBMs.

What’s more, HRSA has effectively conceded that it can’t enforce its guidance. The recently launched HHS Guidance Repository contains numerous guidance notices from HRSA. However, the repository contains disclaimers stating that the documents “do not have the force and effect of law and are not meant to bind the public in any way.”

Perhaps that’s why Lilly recently began limiting distribution of certain Cialis formulations. (Click here to read the notice.) External 340B contract pharmacies will no longer be able to dispense brand-name Cialis on behalf of covered entities. This move makes sense given that there are more than a dozen generic versions of Cialis on the market.

Lilly’s actions forced HRSA to acknowledged that its contract pharmacy guidance is “not legally enforceable.” D'oh!

The 340B program continues its unbridled takeover of the pharmacy industry. Considering the dollars involved, I’m skeptical about the prospects for appropriate legislative and regulatory reform of the 340B program. Only a direct legal challenge to HRSA’s irresponsible and incomplete oversight will get 340B on track.