The stunning growth of specialty pharmacies in the 340B Drug Pricing Program has accelerated a troubling trend: Patients covered by commercial insurance and Medicare Part D are footing the bill for 340B savings.

That's the uncomfortable reality of the 340B program’s hidden prescription economics.

Whenever a prescription is eligible for 340B pricing, an insured patient could pay thousands of dollars out of pocket—even as the 340B hospital and its contract pharmacy generate substantial profits. Meanwhile, private health plans and Medicare pay full price for drugs that are sold to 340B covered entities at deep discounts, further subsidizing hospitals and PBM-owned specialty pharmacies.

Below, to show you how this occurs, I follow the dollar for a brand-name specialty drug used by a consumer with commercial insurance. Our indisputable math exposes the little-understood economics behind specialty pharmacies in the 340B program.

I hope that the program’s participants take an honest look at who is actually paying for their 340B savings. As always, I welcome your feedback via email or in the comments below.

Today’s article is the fourth in our 2020 series exploring the 340B Drug Pricing Program. Here are the first three installments:
For broader background on 340B’s role in the pharmacy and PBM industries, see section 11.5 of our 2020 Economic Report on U.S. Pharmacies and Pharmacy Benefit Managers.

I draw upon the model we introduced in Here’s How PBMs and Specialty Pharmacies Snag Super-Size Profits from the 340B Program.

Consider a prescription with the following characteristics:
The table below traces the profits for the 340B covered entity and the pharmacy under three types of contractual arrangements. We assume here that the pharmacy retains the dispensing and service fees that the PBM and manufacturer paid. 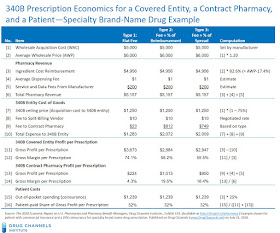 1) Pharmacies share in the 340B discounts that covered entities earn.


As the example above shows, a 340B hospital could earn thousands of dollars from a specialty prescription that it never dispenses. (Item [11]) When compensated under agreement Types 2 and 3, the contract pharmacy earns profits that are three to four times larger than a specialty pharmacy’s typical gross profit from a third-party payer. (Item [13])

The superior profitability of a 340B prescription lets hospitals offer generous pharmacy fees and share a percentage of the prescription savings with the contract pharmacy. A hospital can capture significant value from the specialty drug prescription and still have plenty of money left to overpay specialty pharmacies. As I demonstrated in my last article, these discounts flow to some of the largest public companies in the U.S.

Contract pharmacy fees aren’t required to be based on the existing fair market value standards utilized in other federal programs. In fact, when it comes to contract pharmacy fees, there’s no guidance at all.
2) Patients are paying a significant share of the 340B discounts earned by hospitals and pharmacies.


The commercially insured patient is responsible for one-third of the total profit earned by the 340B hospital and the contract pharmacy. (Item [15]) Wow.

If the patient had a high deductible plan, then 100% of the 340B savings would come from the patient.

Note that the example above illustrates a single prescription. Many patients also have annual deductibles that would increase the patient’s contribution to the 340B industry participants.


Our example also applies to Medicare patients. Like commercial plans, Medicare Part D plans often use percentage cost sharing instead of fixed dollar copayments for drugs on higher tiers. Medicare beneficiaries, unlike those in most private insurance plans, can face unlimited out-of-pocket prescription drug costs if they reach the catastrophic coverage limit. Consequently, a significant number of Medicare beneficiaries had very high levels of out-of-pocket spending.

For 2017 (the most recent year for which data are available), more than 1 million Part D enrollees had total drug spending above the catastrophic coverage threshold. They spent an average of $3,214 out of pocket.

I wonder how these seniors would feel if they knew that their out-of-pocket spending supported hospitals and PBM-owned specialty pharmacies.
4) Commercial payers and Medicare Part D fund a majority of the 340B program’s savings.

The net prescription cost to the payer is the pharmacy reimbursement from the PBM (Item [3] + Item [4]) plus PBM administration expenses (not shown), minus the portion paid by the consumer (Item [15]). The payer’s costs are also offset by any rebates received from the manufacturer that are passed through by the PBM (not shown).

ICYMI, I first highlighted this issue in my 2016 Journal of Managed Care & Specialty Pharmacy commentary: Challenges for Managed Care from 340B Contract Pharmacies.
5) Manufacturers often pay much more than 100% in total discounts.


The 340B statute prohibits manufacturers from having to provide a discounted 340B price and a Medicaid drug rebate for the same drug. However, there are no statutory protections against such duplicate discounts for prescriptions paid by commercial third-party payers or Medicare Part D plans. Therefore, manufacturers often pays rebates on the same prescriptions to commercial payers for products that covered entities purchase at 340B prices. Consequently, they end up paying the healthcare system for their drugs.
340B Health, which lobbies for hospitals that participate in the 340B Drug Pricing Program, argues that the program “does not cost taxpayers any money.” Be wary of this misleading half-truth. The harsh reality is that patients and payers are funding the savings that flow back to 340B covered entities and their contract pharmacies.

This fundamental unfairness is discussed rarely if ever. Rather than touting how hospitals spend their 340B savings, it’s time to start asking where those savings come from.