The 340B Drug Pricing Program has logged another year of incredible growth.

According to data provided to Drug Channels by the Health Resources and Services Administration (HRSA), discounted 340B purchases were at least $29.9 billion in 2019. That figure is an astonishing 23% higher than its 2018 counterpart.

What’s more, the 340B program is now almost as large as the Medicaid program’s outpatient drug sales. However, 340B lacks Medicaid’s regulatory infrastructure and controls. Medicaid rebates directly and transparently lower drug costs for the government, while 340B discounts disappear into providers’ financial statements. It’s troubling and hard to defend.

Read on for our latest details on the 340B program’s ongoing and startling growth.

Hospitals and other 340B covered entities profit from the difference between a drug’s third-party reimbursement and the covered entity’s 340B acquisition cost, a.k.a., the 340B ceiling price.

Consequently, hospitals and other 340B covered entities can acquire many brand-name specialty pharmaceuticals for as little as $0.01, a practice known as penny pricing. This can occur when the calculation for a 340B price yields zero, which means that a drug has hit its 100% Medicaid rebate cap. For instance, AbbVie disclosed that Humira, the top-selling drug in the U.S., hit the rebate cap starting in early 2016. (source) Since then, both 340B hospitals and the Medicaid program have been able to buy Humira for $0.01.

For broader background on 340B’s role in the pharmacy and PBM industries, see section 11.5 of our 2020 Economic Report on U.S. Pharmacies and Pharmacy Benefit Managers.

I have been covering the 340B program on Drug Channels for eight years now. Click here to read my more than 80 articles about the program.

In recent years, the Health Resources and Services Administration (HRSA) has provided Drug Channels with data measuring the 340B program. Apexus, the HRSA-designated Prime Vendor, reports these data to HRSA. A little-known fact: Apexus is owned by Vizient, one the largest hospital group purchasing organizations.

The following chart summarizes the ongoing surge in covered entities’ purchases made under the 340B Drug Pricing Program. It also includes our estimates of the value of those purchases at undiscounted, non-340B prices. 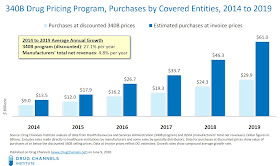 Here’s a summary of our latest findings:
Two important comments on these data:
340BIG

Many partisan supporters try to minimize 340B’s share of the total U.S. market. In reality, the 340B program is a significant and growing part of the industry.

Here are three computation approaches that portray the size of today’s 340B program:


The discounted HRSA figures above include purchases at or below the deeply discounted 340B ceiling prices. An appropriate comparison must therefore also be discounted sales, i.e., manufacturers' net revenues after rebates and discounts.

According to IQVIA, manufacturers’ net revenues were projected to be $360 billion in 2019.

This overall average also hides wide variation. Specialty drugs have a higher-than-average share of sales made at 340B discount prices. For example, Merck recently disclosed that one-third of Keytruda’s sales come from 340B covered entities.


The 340B program has become a significant and growing part of the total discounts that manufacturers provide.

For 2019, the total value of gross-to-net reductions for brand-name drugs was $175 billion. (See Section 9.2.2. of our 2020 pharmacy/PBM report.) This figure measures the gap between: (1) manufacturers’ gross revenues of brand-name drugs at the wholesale acquisition cost (WAC) list price, minus (2) manufacturers’ actual revenues at drugs’ net prices after rebates, off-invoice discounts, copay assistance, price concessions, and such other reductions as distribution fees, product returns, the 340B Drug Pricing Program, and more. Rebates constitute about two-thirds of gross-to-net reductions.


For a final comparison, consider the Medicaid Drug Rebate Program (MDRP). Pharmaceutical manufacturers that participate in the MDRP must also agree to offer a 340B ceiling price to covered entities.

The Centers for Medicare & Medicaid Services (CMS) projects that net sales of outpatient drugs paid by Medicaid were $34.9 billion in 2019. See The Latest CMS Outlook for Drug Spending—And How COVID-19 Will Change It.

Therefore, the 340B program is now 85% (= $29.9 ÷ $34.9) as large as the Medicaid program.
For an alternative estimate, I recommend Measuring the Relative Size of the 340B Program: 2018 Update. Using different assumptions about 340B discounts, Berkeley Research Group concluded that 340B accounted for 14.0% of brand-name drug sales.

340B Health, which lobbies for hospitals that participate in the 340B program, continues to claim falsely that 340B is "just 1% of the total U.S. drug market.” LOL. (As of this morning, this figure appeared on the 340B Infographics page of 340B Health’s website.)

BTW, 340B Health always launches an annual ad hominem attack on me to distract us from the uncomfortable facts about the program’s true size. Can’t wait.

Longtime readers know that I believe that the 340B program is long overdue for reform, especially in light of the many abuses and problems that have been uncovered by the U.S. Government Accountability Office (GAO) and the Office of the Inspector General (OIG). Substantial evidence suggests that 340B savings are not always shared with patients and their insurance providers, including Medicare.

Unlike the highly regulated Medicaid program, the 340B program is managed via a tangle of sub-regulatory guidance, private letters, and “Frequently Asked Questions” posted to the HRSA website.

There is also no transparency into how 340B discounts are spent, because hospitals and their lobbyists fight any call for them to disclose or account for how they use their 340B profits. There is compelling evidence that hospitals are double-counting 340B savings against their fundamental legal and statutory community benefit obligations as non-profit organizations.

By contrast, detailed Medicaid data are available from nonpartisan government agencies. Meanwhile, the 340B program’s advocates and regulators consistently misrepresent the program's size and growth.

In our current environment, there’s little chance for reform. Consider this year’s update to be my annual reminder that the 340B program is not fine.