First, let me say thank you to all of the healthcare workers who are putting themselves at risk during this crisis.

As I noted last week, many of the crucial issues for our healthcare system will remain after we all get through this challenging period. In that regard, here’s a look at some noteworthy news from the past month:
Plus, we unveil the teaser trailer for Drug Channels Video!

P.S. Join the more than 9,000 followers of my daily links to neat stuff at @DrugChannels on Twitter. My recent tweets have highlighted such topics as:
I have also been tweeting many under-the-radar stories about how the coronavirus affects drug channels.

To help you interpret the first three stories below, here’s a quick refresher on drug pricing terminology:
An updated review of these issues appears in Chapter 9 of our new 2020 Economic Report on U.S. Pharmacies and Pharmacy Benefit Managers.

AND NOW, THE NEWS


Sanofi has updated its annual report on list vs. net drug prices. For 2019, Sanofi reported that its average list prices rose +11.1%, but its average net prices fell -2.9%. It’s the fourth year for which net prices declined. Total rebates were $13.9 billion, which equals 55% of sales at list price. 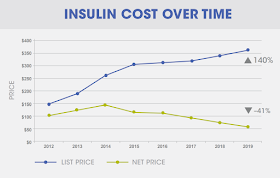 List prices for its insulins have grown by 140% over the past eight years, while net prices declined by 41%.

How can health plans and PBMs justify benefit designs that require patients to pay out-of-pocket expenses for insulin based on the phony list price? Why should a patient ever pay full price for insulin when the drug is sold to insurers at deep discounts? Crazy.
Rebates in the Pharmaceutical Industry: Evidence from Medicines Sold in Retail Pharmacies in the U.S., NBER Working Paper No. 26846


The Sanofi data illustrate the systemic gap between list and net prices in the United States. I have analyzed this issue in numerous Drug Channels articles. Most recently: Surprise! Brand-Name Drug Prices Fell in 2019.

I’m gratified to see that academic economists are finally starting to document this gap with technical rigor. The authors of the NBER working paper use SSR Health data to study list and net prices for brand-name drugs. From 2012 to 2017, they found that:
They also found that average rebates increased from 32% to 48% of list prices The increase was due to growth in rebate-levels over a product’s life cycle rather than a shift towards more highly rebated products.

Those of us in the industry already know these conclusions. I hope that this well-done academic analysis can convince others about the drug pricing realities.
Changes in List Prices, Net Prices, and Discounts for Branded Drugs in the US, 2007-2018, Journal of the American Medical Association (JAMA)

This paper is notable because three of the authors—Hernandez, Good, and Gellad—also co-authored The Contribution Of New Product Entry Versus Existing Product Inflation In The Rising Costs Of Drugs, one of the worst and most misleading articles that has ever appeared in the journal Health Affairs. This earlier paper concluded, for example, that “cost increases were due to inflation in the prices of existing drugs, particularly insulins.”

But of course, a drug’s list price does not equal its “cost” to anyone. That’s especially true for insulin. A one-line disclaimer buried in the paper’s limitation section does not absolve the authors of responsibility for having created an obviously false narrative. FYI, Robert Dubois of the National Pharmaceutical Council effectively demolished the paper in Rx Drug Costs: List Prices Versus Net Prices And The Importance Of Staying Within The Data.


ICYMI, RxAdvance will replace Cigna’s Express Scripts as the PBM for some Amazon employees. PillPack will provide mail pharmacy services. Centene is a major backer of RxAdvance.

It’s another small but notable move by Amazon. For my latest $0.02 on Amazon, see Section 12.5.1. of our new 2020 pharmacy/PBM report.
Drug Channels Video: Coming Soon!


We will soon be launching Drug Channels Video (Permanent link: https://drugch.nl/video.) Crank up your speakers and enjoy a sneak peek at our jazzy animated intro. Click here if you can’t see the video.