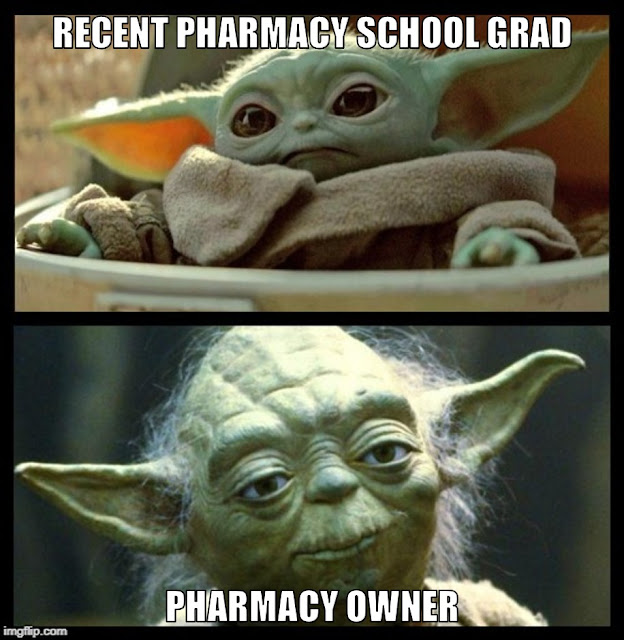 Read on for our look at pharmacy profits and my comments on the competitive dynamics of retail pharmacy. How many independents will survive? Difficult to see. Always in motion is the future.

ANALYZE THE DATA YOU MUST

The 2019 NCPA Digest, Sponsored by Cardinal Health presents selected 2018 financial and operating data submitted by pharmacy owners. These data have strengths and weaknesses. They do, however, provide the only publicly available, consistently published look at the financial position of independent pharmacies.

NCPA also collects more detailed financials, but it doesn’t share those data. As I understand the situation, NCPA has a self-imposed gag clause to prevent external analysts from examining pharmacy-owner economics. Since I don't have access to the complete financial report, some of the figures below are our estimates. If there is better news, NCPA has chosen not to reveal it.

Here are some basic definitions to clarify the pharmacy profit story:
For more on pharmacy and prescription economics, see our annual Economic Report on U.S. Pharmacies and Pharmacy Benefit Managers.


In 2018, independent pharmacies' overall gross margin from prescription and non-prescription products was 21.8%. The 2018 figure is equal to last year’s figure.

This year’s findings differ from U.S. government statistics, which show higher overall gross margins at chain and independent drugstores. In 2017 (the most recent year for which data are available), the drugstore industry’s overall average gross margin, as reported by the U.S. Census Bureau, was 25.7%. (source) The industry margin is higher than the independent pharmacy margin because non-prescription front-end products with higher-gross margins account for a greater share of sales at chain drugstores.
2) Independent pharmacies’ prescription profit margins also were stable. 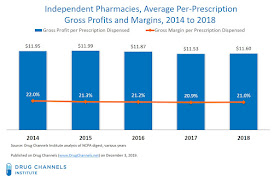 
In recent years, the NCPA digest has recorded an odd discrepancy. For independent pharmacies, the generic dispensing rate (GDR)—the percentage of prescriptions dispensed with a generic drug instead of a branded drug—lagged that of the overall market from 2012 to 2016. For 2017, the gap essentially vanished.

For 2018, there was a small, but not meaningful, gap. According to IQVIA, the GDR for unbranded generics in the overall market was 85.6% in 2018. The GDR for independent pharmacies was 85%.
4) The average pharmacist who owned a single pharmacy earned about $129,000 in 2018—down for the fifth consecutive year.


For 2018, the average annual prescription volume per pharmacy dropped by -0.5%%, to 58,823 prescriptions. This lower volume resulted in lower compensation for a pharmacy owner. I’m afraid we must judge them by their size.

We estimate that on a per-pharmacy basis, the owner’s discretionary profit (ODP) shrank from $200K in 2015 to $129K in 2018. For 2018, total non-owner payroll expenses were comparable to the 2017 figure. Therefore, the hit to owners’ earnings came from the lower volume of prescriptions per pharmacy in the NCPA sample.

The salary gap between a pharmacy owner and an employed pharmacist has almost vanished. For 2018, the average gross base salary for a pharmacist at a retail, mail, long-term care, and specialty pharmacy reached nearly $123,000. See Pharmacist Job Market: Salaries Keep Growing While Retail Employment Drops .

Owning a pharmacy, with all of its hassles and obligations, now brings the same reward as being an employee. Is it any wonder that many owners are looking to get out?
5) By the NCPA's count, the total number of independent pharmacies continues to drop.


According to the NCPA’s counting, the total number of independent community pharmacies declined by 6% from 2011 to 2018. See the chart below. However, IQVIA data show much more stability in overall independent pharmacy numbers. I can’t figure out the discrepancy.
[Click to Enlarge] 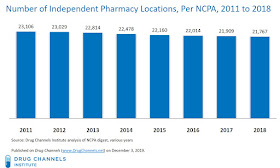 THERE IS NO TRY

Independent specialty pharmacies have also been facing slowing growth and mounting competitive pressures, per my comments in The Shakeout Begins: The Fastest-Growing, Private Specialty Pharmacies of 2018.

The U.S. Bureau of Labor Statistics (BLS) projects that chain and independent drugstores will employ 11,000 fewer pharmacists in 2028. Pharmacist jobs at hospitals, physician offices, and other non-retail settings will outpace growth at retail outpatient settings. See Grim Job Outlook for Retail Pharmacists Gets Even Grimmer.

The BLS forecast may prove overly optimistic. The U.S. pharmacy industry faces the prospect of a shakeout that would sharply reduce the number of pharmacy locations. This change would mirror the pre-Internet disappearance of small retailers in favor of national chains. See my comments about other retail industries in Shopping for Prescriptions: How Deductibles Will Reshape the Pharmacy Industry.

Despite the gloom, outside investors seem enamored of prescription dispensing. Amazon continues to signal that it wants to become a large participant in the pharmacy market. Another intriguing trend is the launching of technology-enabled pharmacies that have received substantial venture capital financing. See the companies and business models discussed in Section 12.5.2. of our 2019 Economic Report on U.S. Pharmacies and Pharmacy Benefit Managers.

It’s tempting for pharmacy owners to fear these changes. Their fear leads to anger—as evidenced by their irrational twitter rants.

The reality is that the pharmacy wars are underway. But as a wise green sage once said: Wars do not make one great.

P.S. For those who don’t have Disney+ or visit the internet, please enjoy CNN’s recap of the Baby Yoda phenomenon.