April is over, and now, come what May, it’s time for our monthly roundup of news stories highlighting key trends for U.S. drug channels. In this issue:
Plus, read media coverage of our recent webinar: Preparing for a World Without Rebates.

P.S. Join the more than 7,400 people who follow my daily updates and links to neat stuff at @DrugChannels on Twitter.

Cigna and Express Scripts Introduce Patient Assurance Program to Cap Out Of Pocket Costs at $25 per 30-Day Insulin Prescription, Cigna

However, overly credulous journalists missed the real story: Drugmakers are paying for this program. Put another way, it's effectively a copay card program in disguise. Express Scripts is merely passing along additional copay support that drugmakers are providing. The money is not coming from the existing rebates that are paid to Express Scripts (and mostly passed on to plans). One tip-off: the press release notes that the program is available only to patients in “non-government funded pharmacy plans.”

Patients will certainly benefit from this program. Frankly, it's ludicrous that many plans had not previously classified insulin as an essential preventative medicine. I commend Express Scripts for developing and supporting this new copay offset program. The company told me that it would also not charge any additional admin fees.

Unfortunately, many plans will likely change nothing about their behavior and operations. For too long, patients who need insulin have been forced to pay retail while their insurer gets a rebate check for their prescription. It's time for insurers to pass along the full value of insulin rebates to patients.
First Pillpack marketing in my inbox as a Prime member, Jay Hancock's Tweet


In 2018, Amazon entered the pharmacy business by acquiring PillPack, a small mail pharmacy with estimated 2018 revenues of more than $150 million. PillPack specializes in repackaging pills for people with chronic conditions who take multiple prescriptions.

PillPack has been expanding licensing at its facilities, thereby providing Amazon with a platform for expanding into the mail pharmacy business. Jay Hancock, a reporter for Kaiser Health News, tweeted this unsolicited email that he received.

For our most current views on Amazon’s actions and the potential impact on pharmacies and PBMs, see Section 12.5.1 of the 2019 Economic Report on U.S. Pharmacies and Pharmacy Benefit Managers.
Magellan Rx Management Biosimilar Program Shifts Infliximab Utilization by 86% in First Year, Resulting in 34% Drug Cost Savings, Magellan Health


Here’s an amazing counterpoint to stories of slow biosimilar adoption.

Magellan Rx Management, the PBM operated by Magellan Health, launched a utilization management program that shifted up to 86% of patients from Remicade (infliximab) to the biosimilars marketed by both Pfizer and Merck. (Magellan’s individual health plan customers may have separate contracts with Pfizer and/or Merck.) By comparison, overall market share for infliximab biosimilars is about 5%. The chart below shows a successful pattern for a Magellan customer. 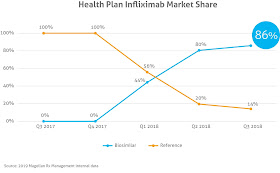 Magellan told me that the 86% figure represents an upper bound for health plans that have fully delegated medical benefit management of the infliximab class to Magellan. Plans that have not adopted its management program have lower levels of biosimilar substitution. Translation: YMMV.

This story is timely, because some people are suggesting that we “abandon the use of biosimilars” and directly regulate biologic drugs’ prices. Perhaps the real market failure is a lack of effort by some health plans combined with the profit-seeking behavior of 340B covered entities that continue to choose brand-name drugs.
Formulary Exclusion: Assessment of Medical Costs, Pharmacy Costs, and Resource Utilization Compared to a Concurrent Control Group, Prime Therapeutics


Formulary exclusion has emerged as a powerful tool for PBMs to gain negotiating leverage against manufacturers. As far as I know, this is the first study to explore how an exclusion formulary affects pharmacy and medical costs.

As expected, the researchers found that pharmacy costs dropped. However, they also demonstrated no difference in such medical costs as inpatient stays, ER visits, and outpatient office visits. It’s a useful reminder that PBMs’ formulary power could remain intact in a world without rebates

The tables below highlight the key results. Warning: The full research report uses the eyestrain-o-vision font.

What Will a Post-Rebate World Look Like?, Specialty Pharmacy Continuum


This article highlights some of my observations and predictions from our recent webinar: Preparing for a World Without Rebates. You can still watch a replay and download the complete slide deck.
Adam J. Fein, Ph.D. on Thursday, April 25, 2019