Employers Are Absorbing Even More Manufacturer Rebates from Their PBMs 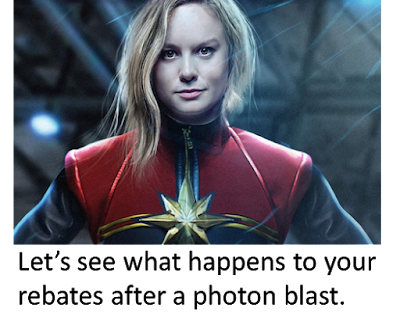 The likelihood of a radical restructuring of the U.S. drug channel has never been greater. A serious effort exists to remove or decrease the role of rebates.

Today, we shed light on one crucial aspect of the current rebate system: how employer-sponsored health plans access the billions of dollars in manufacturer rebates that are negotiated by their pharmacy benefit managers (PBMs). For this analysis, we rely on the Pharmacy Benefit Management Institute’s (PBMI) excellent new reports.

As you will see, employers are receiving an increasing share of the rebate money collected by pharmacy benefit managers. However, employers’ rebate agreements with PBMs vary widely. Important differences also exist in rebate arrangements for traditional vs. specialty drugs.

Despite these data, we still don’t know how much of these rebates offset out-of-pocket costs for the patients whose prescriptions generated the rebate funds. As I warned last August: The focus of rebate reform will turn from PBMs to the plan sponsors that are absorbing rebate dollars.

As always, I encourage you to review the original source material for yourself. Both PBMI reports are free with registration on its site. Here are the report links:
Takeda Pharmaceuticals North America sponsored the drug benefit design report. Walgreens and AllianceRx Walgreens Prime sponsored the specialty drug benefits report. Drug Channels toasts both organizations for their support of this important research.

Just so you know, I was on the 2018 Trends in Drug Benefit Design report’s advisory board, which means that I was paid a small fee to review a pre-publication version of the completed research. Final responsibility for the report’s content rests with PBMI.

For more on PBMs and the rebate system, see Chapters 5 and 9 of our new 2019 Economic Report on U.S. Pharmacies and Pharmacy Benefit Managers.

A MAR-VELL OF NEGOTIATION

The PBMI data reveal that different plan sponsors have varying preferences for how the value of rebates is reflected in their pharmacy benefit spending.

For these employers, the discounts provided by rebates are presumably factored into the prescription prices charged by the PBM. The share of employers that do not receive rebates has declined significantly in recent years. For 2014, about one-third of employers reported receiving no rebates for traditional and specialty drugs.

The two charts below summarize PBMs’ 2018 rebate relationships with their employer clients for traditional and specialty drugs. To highlight changes over time, we include the responses from 2014, the earliest year for which with comparable figures are available. 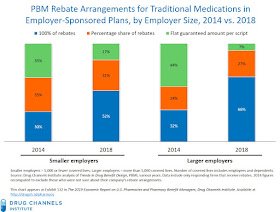 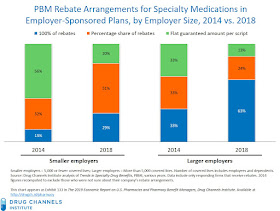 Rebates can reduce a third-party payer’s net prescription costs as funds flow through the channel. Health plans and PBMs argue that “rebates lower costs for patients.” But that’s only partially accurate.

My Wall Street Journal op-ed (Don’t Blame Drug Prices on ‘Big Pharma’) emphasizes that plans may choose not to use rebates to lower the out-of-pocket costs for the patient whose prescription generated the rebates. See also my mathematical example in How Health Plans Profit—and Patients Lose—From Highly-Rebated Brand-Name Drugs.

it may be very difficult to dislodge or disrupt the existing system. One significant barrier to change is health plans and employers, both of which use ever-growing rebate dollars to offset overall plan costs. Last year, PBMI found that only 4% of employers reported that rebates were used to reduce member out-of-pocket costs at the point of sale. (See Employers Are Getting More Rebates Than Ever—But Sharing Little With Their Employees.) Unfortunately, PBMI chose not to update this insightful question for 2019.

In my @DrugChannels tweet yesterday, I highlighted PBMI data showing that employers are concerned about the gross-to-net bubble and want an alternative to rebates to manage drug costs. The battle over rebate reform is just getting started. Let’s hope it doesn’t last as long as the Kree–Skrull War.

P.S. Captain Marvel is a super fun movie. If you used the Internet in the 1990s, you will absolutely love its fantastic throwback website. Excelsior!